Sorry, I now realise you´ve already said that dps is bypassed. One more thing, though. You are connecting your guitar straight into the AI without engaging Hi-Z?

You say the bass has a preamp? I'm just wondering if this could (partly at least) be a ground loop issue, as that preamp will have a power supply so there could be two ground paths present.

Can you try just plugging both the bass and the guitar directly in, with no external pres or effects, just to see if the same thing happens?

Also, there may be a small amount of crosstalk between channels. With the screenshots so far, it's hard to see the actual level of the noise on the other channel as there is no reference scale on the Y-axis to see how loud the cross-channel signal is. If it's way down at 80dB below the main signal level, it's probably not worth worrying about.

Thanks for your replies! Yes, the Hi-Z option is turned off with the guitar directly connected. I'm going to test this setup without the external preamp. I would be very interested to hear more about this ground loop hypothesis, since I was considering that as well. Any more thoughts on that?

Both of the signals are about 48db apart.

With the bass plugged straight into input2 the issue does still occur. Curiously the gain knob on input2 does not have an impact on the bleed into input1.

I do have a peak at 50hz (an issue im struggling with for a while now including harmonics. For further information: https://www.soundonsound.com/forum/view ... 03#p755603) in input2 with only the bass connected. Maybe the bleed is connected to a grounding issue?

Unless your instruments have active pickups, I don't know how you manage to get a proper signal into the soundcard without engaging the Hi-Z or using a DI box...

manwilde wrote:Unless your instruments have active pickups, I don't know how you manage to get a proper signal into the soundcard without engaging the Hi-Z or using a DI box...

Correct, recording a passive guitar with those settings would not result in a proper guitar signal. Since this setup is not meant for recording guitar, it doesn't matter. I also did this bleed-test with a 6.3mm to 3.5mm jack adapter with the same results.

Ok, but just to rule things out, what's the crossfeed like if you engage the Hi-Z on channel one with the guitar plugged in and unplugging the bass from channel two?

If nothing is plugged in then there is no crossfeed. As soon as I put anything in the input, the crossfeed shows up. I guess there is a switch in the input. I can test the guitar with the Hi-Z option on with a source of choice in the 2nd input, if that is of interest?

I did a fresh install of reaper and the ur242 drivers on a differnt PC and the issue can be observed here as well. Is the unit defective or is the crosstalk of the ur242 at 46db?

It all seems really weird, maybe the unit is defective. But anyway it would be good to test with proper gain staging (i.e. guitar with Hi-Z on and nothing on channel two, then add a line level input on channel two with and without the guitar on channel one) to make sure, IMHO.

manwilde wrote:it would be good to test with proper gain staging (i.e. guitar with Hi-Z on and nothing on channel two, then add a line level input on channel two with and without the guitar on channel one)

Yes, you are onto something. I have plugged in a bass in input1 hi-z engaged and a overdrive pedal in input2 and the bleed is gone. As soon as the hi-z button is disengaged it appears again. With input2 disconnected there is no bleed with or without hi-z engaged.

Crosstalk in this test on another UR242 was measured at -100dB, so around -45dB is far from normal.

In light of your latest post, I need another think.

Thank you for your contributions. That is useful information for me.

I think I know what could be going on. I could be more certain if I could find a proper circuit diagram for the interface, but I can't.

The only thing that all the inputs have in common is their ground/sleeve connection. Therefore it must be to do with that, and some of the signal from one input leaking through to another input via that ground path.

My idea of how this could occur depends on:

A) The sleeve connections on all the TRS/XLR inputs being connected to a common ground plane/track on the PCB not being directly connected to the system 0v reference at some point, and...

B) The line/hi-Z switch acting rather like this one in a Mackie mixer (this is not the UR242 block schematic): 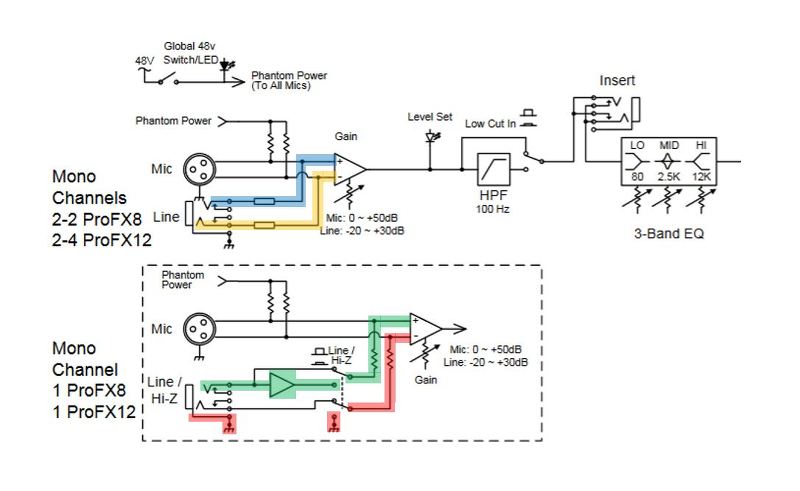 ...where a high impedance input op-amp is put in series with the positive T (tip) input input signal to both increase the input impedance and to also boost the guitar level signal up to line level. But the R (ring) connection is also connected to the system 0v rail as well as ground when the Hi-Z switch is operated.

I would normally have expected that the ground rail would be connected to 0v at a single point, probably right at the unit's input power connector, to equalize the potentials. Maybe there is no direct connection at all though but possibly a link via a capacitor so that any potential DC current is blocked. Or it may be that there is one direct connection at the input power socket (these power sockets often have two pins for ground/0v connections) but the solder joint is poor or cracked and relatively high resistance, maybe a few ohms.

Both the above would allow for there to be a small resistance between the ground track and 0v. Keep that in mind.

With only one input having a TS jack inserted, the other inputs' T and R connections remain unconnected so there is no obvious signal bleed.

But plug in a TS jack to another input and the sleeve of the jack connects the R and S connections of the jack together, so the negative side of the differential input is now connected to the UR242 ground potential.

With a TS jack input, you would normally expect this negative input to be held firmly at a constant 0v. But if the ground to 0v connection has some measurable resistance, then the whole ground track can be raised in potential very slightly if another TS input has a signal on it, and the negative input (R) connection of this jack with no input signal will see a very low level version of the signal appearing. The positive (T) connection of the input sees nothing, so the differential input outputs a low-level, polarity reversed signal, which is what you see.

If you plugged in an XLR cable or a TRS jack, the R and S connections would remain unconnected, so you would only be able to measure the normal, much lower level crosstalk, not this much higher level bleed,

This cross-connection of signals occurs before the pre-amps, so is not affected by the gain setting of the input with the signal.

Now if the Hi-Z switch on input 1 is activated with a TS jack inserted, and as I suspect, the negative input on the differential circuit is connected to 0V and also to ground, this means that all the ground connections are at 0V and are fully linked, so there will be no transmission of low level input signals via the ground connection.

This is all a bit convoluted and not easy to explain, and involves some assumptions which may be wrong. But it could happen.

0v and ground probably have a measurable resistance between them, meaning they can have slightly different potentials.

Using TS jacks connects the negative side of the pre-amps differential input to ground.

The resistance between ground and 0v allows a very low level signal appearing on one jack to be transferred via the ground connection to the negative side of another input with an inserted TS jack, resulting in a low level inverted polarity signal that is otherwise a copy of the main input signal.

Either by design or by accident, operating the Hi-Z switch directly connects the ground and 0v tracks together, which stops any low-level signal bleed between inputs with TS jacks inserted.

This may all be down to the design of the interface and it is operating the way it was intended.

But it could be down to a hardware fault, so if you did open up the unit, I'd look at the solder joints around that power supply connector. It's an easy connector to put unintended strain on, which could cause an already weak solder joint to crack.

Hope this makes some sense.

Hey thanks for the effort alone! I'm going to carefully read all of it tomorrow and share my thoughts as soon as I have a response that takes your points into consideration. Thanks you very much.

Sorry to be late in on this one -- the thread wasn't what I thought it to be...

Could this be another case of a fully double-insulated system running without a solid ground? That could certainly be possible for crosstalk between channels via common ground paths when working with unbalanced inputs.

Technical Editor, Sound On Sound...
(But generally posting my own personal views and not necessarily those of SOS, the company or the magazine!)
In my world, things get less strange when I read the manual...
Post Reply
39 posts