This kind of thing must be driven by company culture, surely?

I mean either Uli is saying "I want you to copy this product, it needs to be in production in three months", or, management is putting so much pressure on people to get products to market in short timescales that their only option is to copy something else so they can sidestep the time it takes to design and refine new things.

I can't believe there's a whole company of people who just think it's perfectly fine to rip off other companies' products shamelessly, without even attempting to even hide it a little...

Arturia’s CEO and co-founder, Frédéric Brun, took to the Simply Synthesizers Facebook Group to make a statement regarding SWING. “This product is in no way the result of a partnership between Arturia and Behringer”, the post reads. “We have worked hard to create the Step range. We have invested time and money to imagine, specify, develop, test and market the KeyStep. Along with our distributors, we have been evangelizing this product, placing it in stores, explaining it, servicing it.”

“Of course we accept competition, and would absolutely understand that Berhinger give their own interpretation of a small and smart controller that would also be a sequencer. Others do, we have no problem with that and see good for the customer, as well as for the industry, in fair competition”.

He closes the post with: “But this is not fair competition here. Coco Chanel once said: ‘If you want to be original, be ready to be copied’. So we could in a way consider the Swing as a compliment. We could. In any case, thank you, everyone who came out and supported us these past 36 hours! It’s been very helpful, very much appreciated”.

What the world *doesn't* need is yet another DAW.

The Elf wrote:What the world *doesn't* need is yet another DAW.

Don't worry as they won't be releasing a new DAW, but a series of new DAWs at the rate of one per month.
I look forward to the names:
Plogic Y
Queue Bass
Bot Toupee
Bro Spoolls 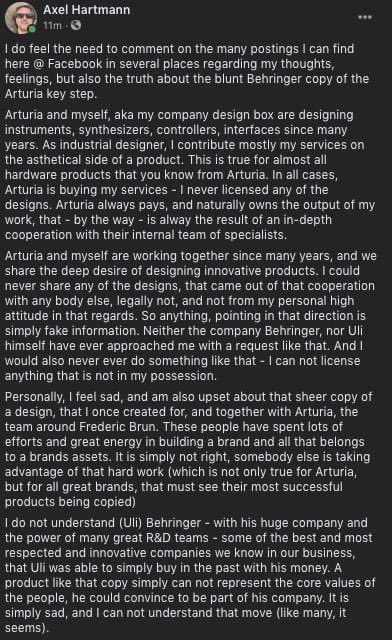 I have an Arturia PolyBrute on pre-order, expected to arrive in a couple of weeks, all being well.

I also have a Behringer 2600 clone on order, expected to arrive at the end of Februrary.

I cancelled a Poly-D order after the cork-sniffer incident and bought a Hydrasynth instead.

On this occasion, I'm mulling my options. I've paid the deposit for, and committed to the purchase price of the 2600 with a friendly and helpful contact from my usual supplier but I could trivially pivot that towards something non-Behringer.

At this point I'm seriously considering converting the 2600 price into something towards the cost of an UDO Super 6. I'd be without a tasty 2600 clone but the manner in which Behringer is conducting itself is very much at odds with my personal moral compass.

I shall watch what happens over the next week or two. I have a Keystep and am not in the market for the clone but it's a horrible thing they've done here and it concerns me greatly.

If Behringer backs off, apologises and settles or withdraws the product then that's one thing but if they double down, I think they'll finally make my 'no go' list and I'll take that, and future money elsewhere even if it means going without the 2600 clone (and the other clones I would really like that could be in the offing later).

I've tried hard to be balanced when it comes to the 'copy vs. innovate' model from Behringer but this specific incident is a step too far and my wallet will always follow my conscience.

How unnecessary, and how sad, that Behringer would do this.

As I'm a mod here: For the avoidance of doubt this is my personal view and does not necessarily reflect that of Sound On Sound.

desmond wrote:I see Behringer appear to up to their copying game again with the new "Swing"

Not sure what you're talking about? The differences seem pretty obvious to me. 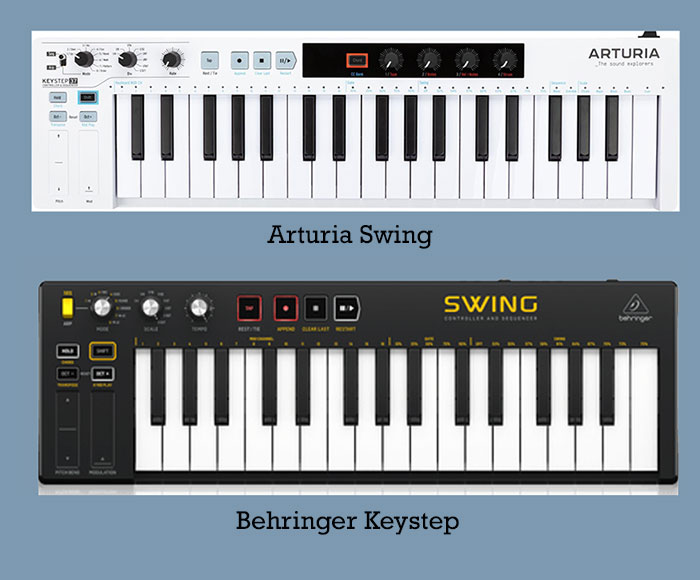 Behringer's keyboard is white, whereas Arturia's is black.

Behringer have got away with it for too long now, and it’s too late to suddenly get all moral.
We’ve all done it, bought their stuff, but the reality of this "Keystep" is that it’s a blatant "rip-off" and there are two things working here, Behringer's ruthlessness, and people’s greed.
I’ve got three Behtinger products, a compressor, some speakers, and an interface, all boring utility stuff, mostly bought when I had no money, I’ve got an inherent dislike for "copies" or replicas of anything, I’d rather go without than have a copy, as I have said many times here, most of the time the compromises make them unacceptable.
The trouble with this Keystep clone, is that it’s just another utility, there aren’t any complicated decisions to make, it either works or it doesn’t, and if it’s cheaper than the competition, then a lot of people will buy it in preference to the original, but would I?
In this case no, this is aggressive "market stealing" if I were a business man I’d not want to go anywhere near an idea like this, and I know people that if it was their ideas that were getting ripped-off there would be no discussion or moralising, it would be a case of stop, or step outside.
We seem to be living in a morally bankrupt world, where if you can get away with it it’s OK, but where is all this going to end? no doubt in a lot of "positive bullshit" trying to justify it.
How about companies actually inventing things of their own, innovative things, you know, like they used to do, companies that have. gone down in history, Moog, ARP, Obeheim, Sequential Circuits, EMS, just a few, is it a sign of how much we owe to them, and admire them, that we are prepared buy these cheap imitations.
These instruments aren’t made anymore, but maybe we should let them sleep peacefully, they had their time, we should move on.

This is why I once refused to buy anything Behringer (leaving aside the quality of their gear, which was reason #1). Over years they seemed to have cleaned up their act and they gained my trust that those day were finally behind them.

It seems it's not been licensed from Arturia, or the designer. Nor should it have been. Behringer appear to have faithfully copied a flawed, short feature-list, low value toy.

And Uli is happy to see years of trust-building publically sacrificed on the altar of this toy? It beggars belief.

I sincerely hope that we hear more of the background to this story - and I hope it clears the air, because right now there's one heck of a stink.

Part of me is wondering if this is a cynical ploy on behalf of Behringer to get people talking about them.

I admit that I am uneasy about owning Behringer stuff. I was aware of their history - I had hoped they were leaving that stuff in the past but we've had Cork Sniffer, then Crave and now this. It looks like they haven't really changed at all.

It would probably be pointless divesting myself of my Behringer synths now, but nor do I feel comfortable about owning something with that name either.

Mind you, I've been considering ways of getting hold of a Modal Cobalt 8X - if somebody buys me one of those, they can have my Behringer synths 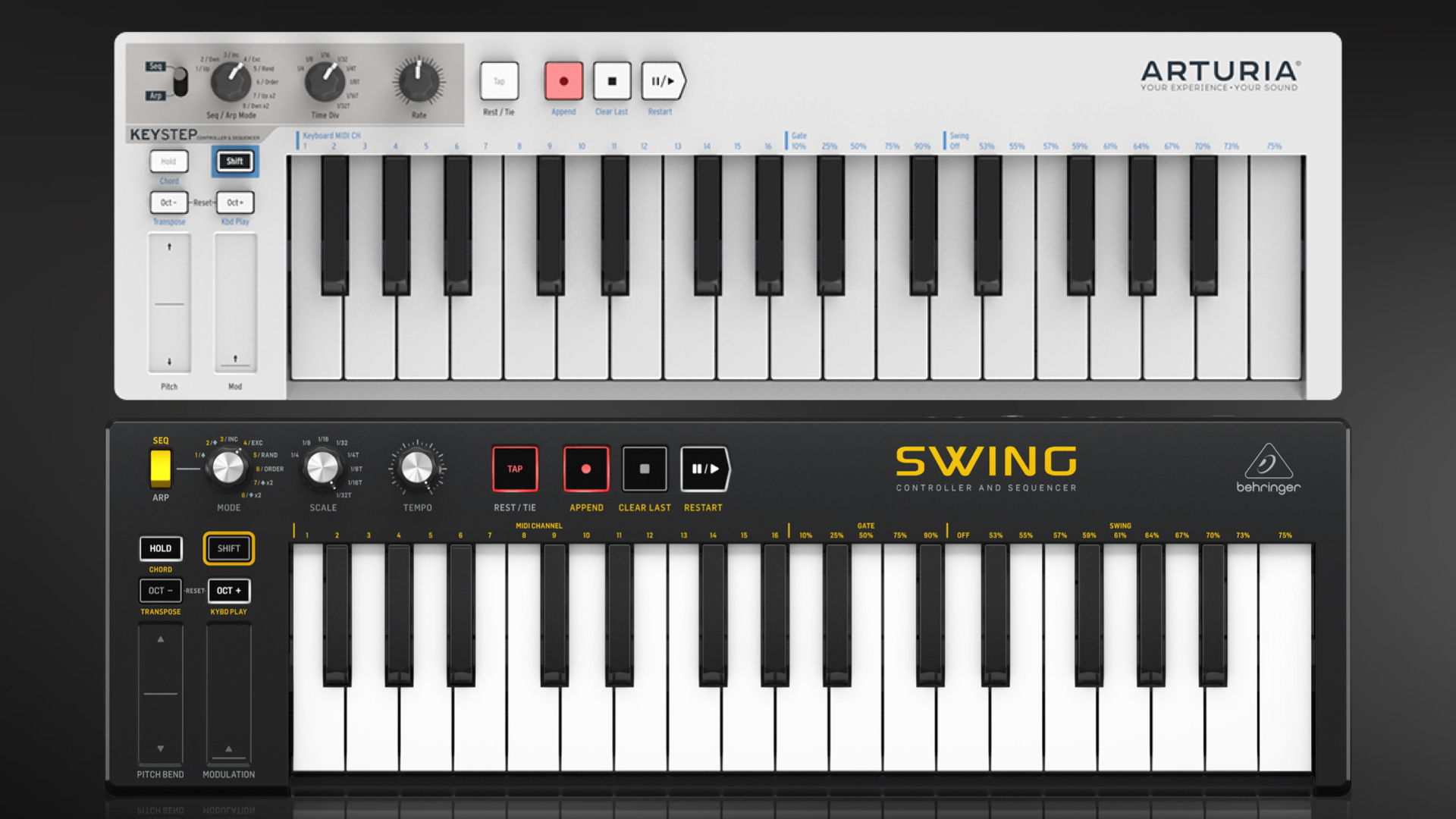 Rich Hanson wrote:
Mind you, I've been considering ways of getting hold of a Modal Cobalt 8X - if somebody buys me one of those, they can have my Behringer synths

The thing about owning anything by Behringer is that it’s still seen, after all these years, as something you bought because you couldn’t afford to get what you really wanted, or as a some sort of cheap substitute, and you try selling anything by Behringer? it’s almost impossible, plus, you’ll get hardly anything for it if you do.
I bought my Behringer stuff with no thought about resale, it’s pointless, and if I do change it, it will probably end up in a charity shop.
That Modal synth Rich, you’re already ahead because if you bought one it’s a unique thing, in its own right, it’s not a copy of anything, and it’s not a cheap substitute.
I can’t have too much a go at Behringer, I’ve got their stuff, and I’ve thought about their synths, but I’ve never been tempted that much to do anything about buying them, for some of the reasons mentioned above.

Eddy Deegan wrote:At this point I'm seriously considering converting the 2600 price into something towards the cost of an UDO Super 6

I'm interested to hear the UDO caught your eye. It's the first mention I've seen since picking up the new SOS review, which was the first I'd heard of it, though I see it's cropped up before.

I thought that blue model looked really appealing. But I wouldn't cancel your 2600 because of this, having ordered it in good faith. It's the product of a lengthy development process by some great people, and it would be unfair on them to blacklist it because of poor subsequent decisions from the company boss.

(They'll either mend their ways because of this, or they won't; it seems to have stirred up a bit of a hornet's nest. My guess is that they wanted something to integrate in some particular way with their new DAW - there have been hints of this - and this was handy, so they pinched it. Poor move.)