Next up, some side panels for the "mirror points". A simple rectangle frame to hold one slab of 1200x600 slab of 50mm Rockwool.

This is an example of somewhere that I used some old off-cuts to do the job. I made the outsides of the rectangular frame from some leftover MDF, which isn't the right choice of material at all, but knowing how I was planning on mounting the panel to the wall, as well as knowing I'd be framing up the outside seperately anyway meant that it didn't really affect the overall result, and I just wanted the stuff out of the way! The sensible thing to do is to just make the whole frame from timber, it'll be easier, stronger and generally less hassle.

Cutting some strips to size; 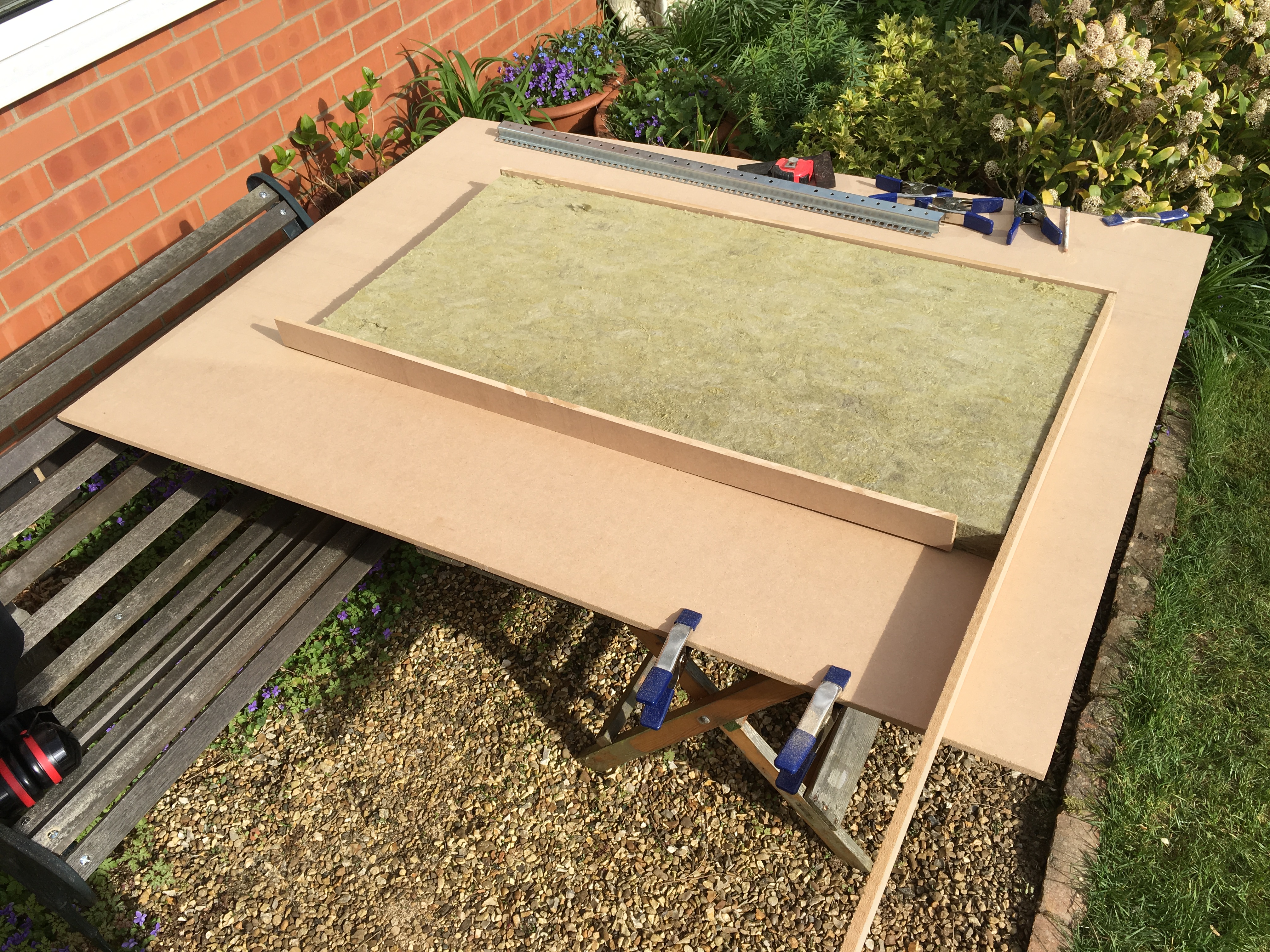 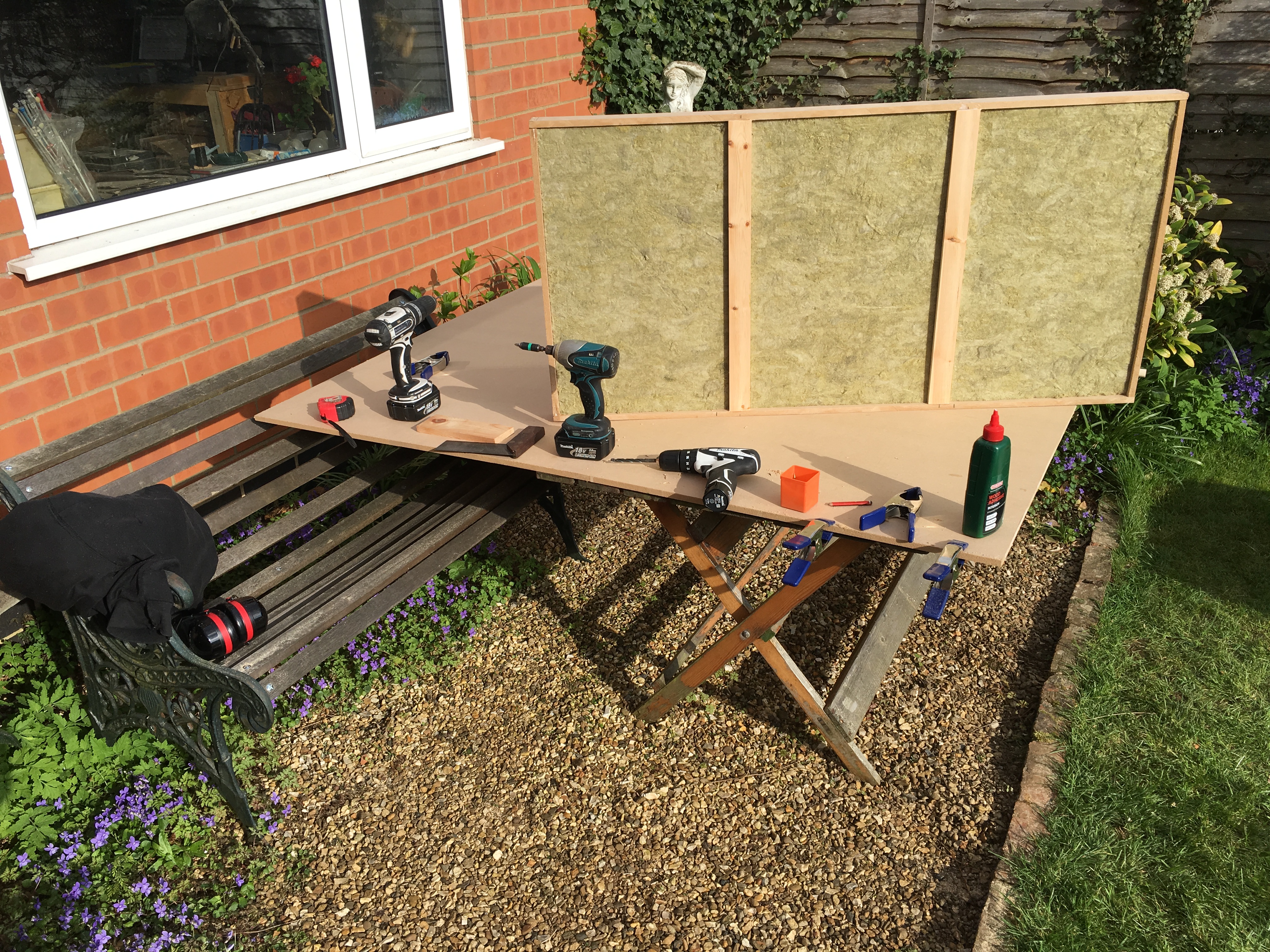 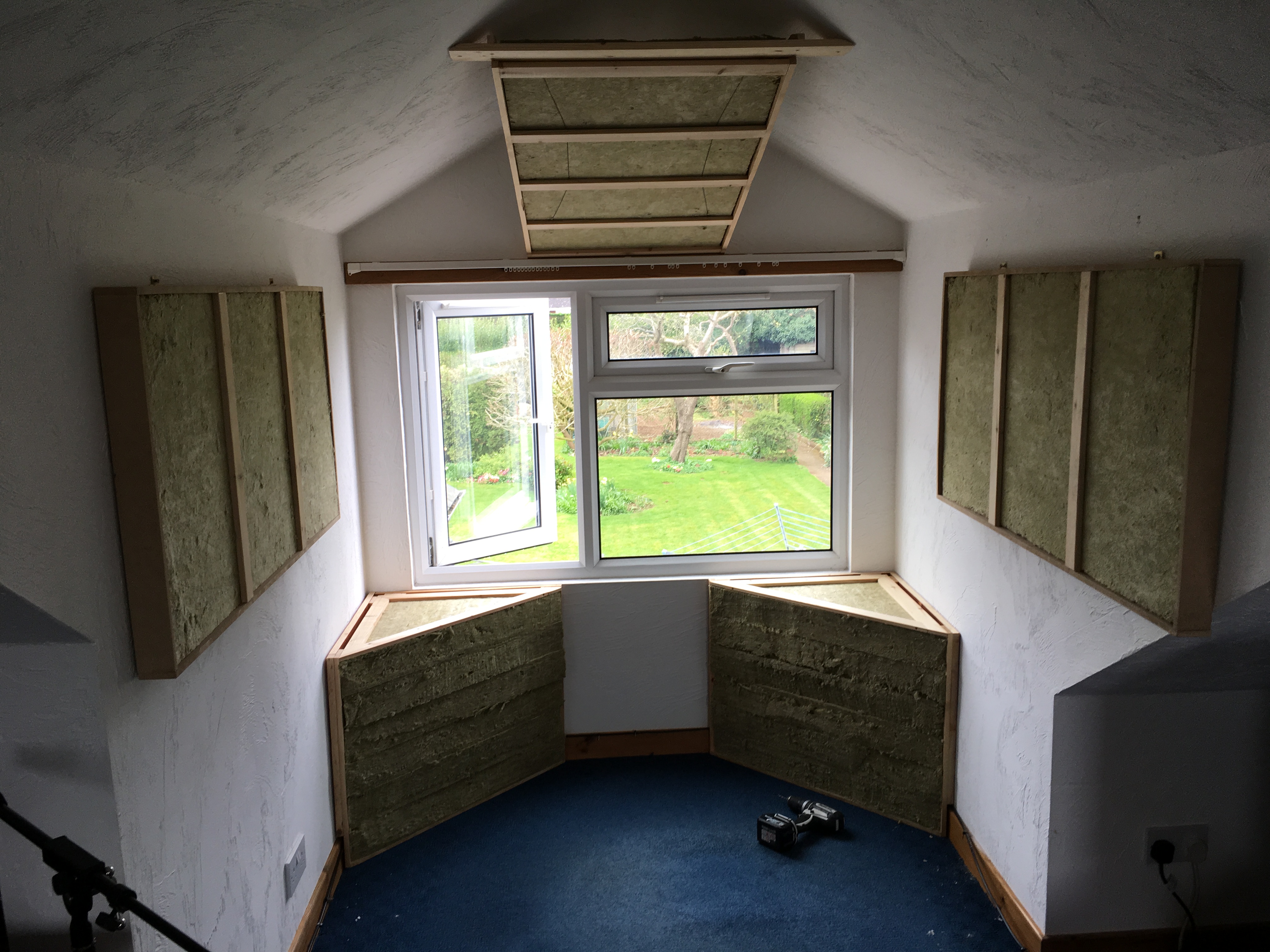 Excellent pictures Luke, and a lovely job all round. I had, sort of, planned to take more pics of my studio refurb but just got impatient to be getting on with the job

Following with interest as I'll be doing something similar soon myself. The photos of the construction are really good to see

Sam Spoons wrote:Excellent pictures Luke, and a lovely job all round. I had, sort of, planned to take more pics of my studio refurb but just got impatient to be getting on with the job

Thanks very much. I try to get as many as I can with most projects, I do tend to end up with some gaps where I got carried away and forgot to take some though.

Eddy Deegan wrote:Following with interest as I'll be doing something similar soon myself. The photos of the construction are really good to see

The next stage was some panels above the corner traps that came out at an angle to meet the window frame, although it's not much of an angle it meant I could get an extra 50mm of Rockwool in at the deepest end.

The start of a frame: 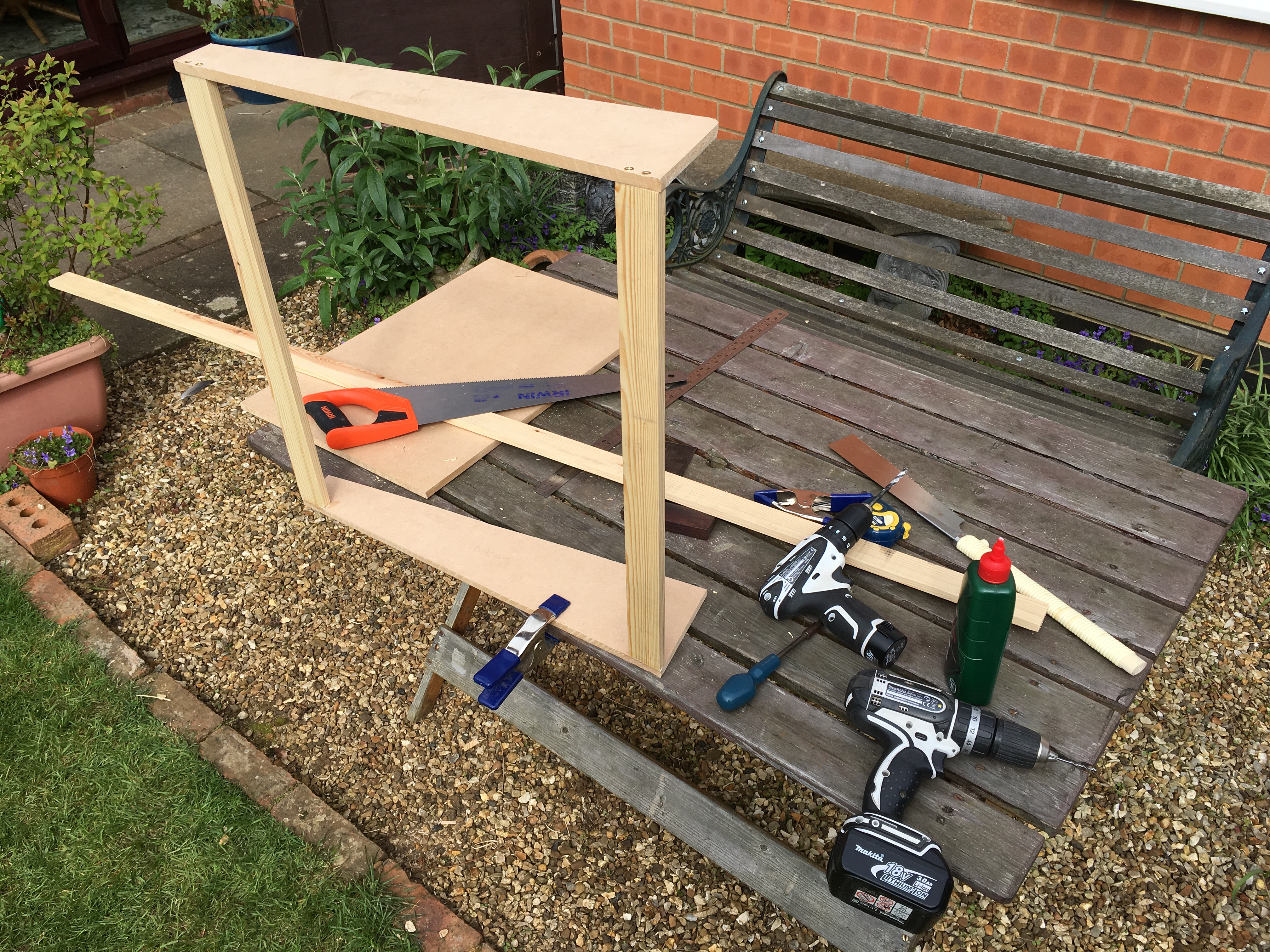 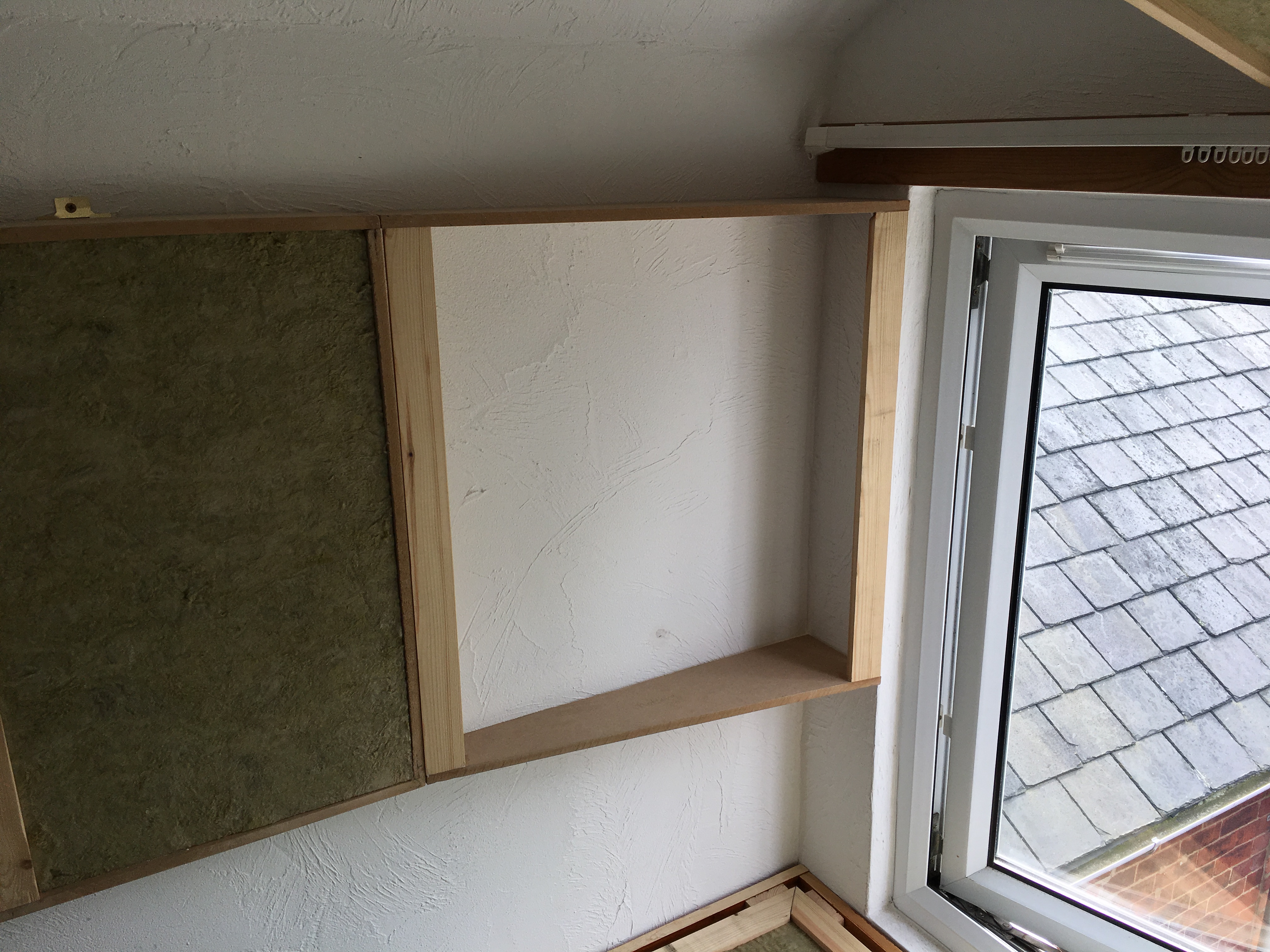 Rockwool in and frame fixed : 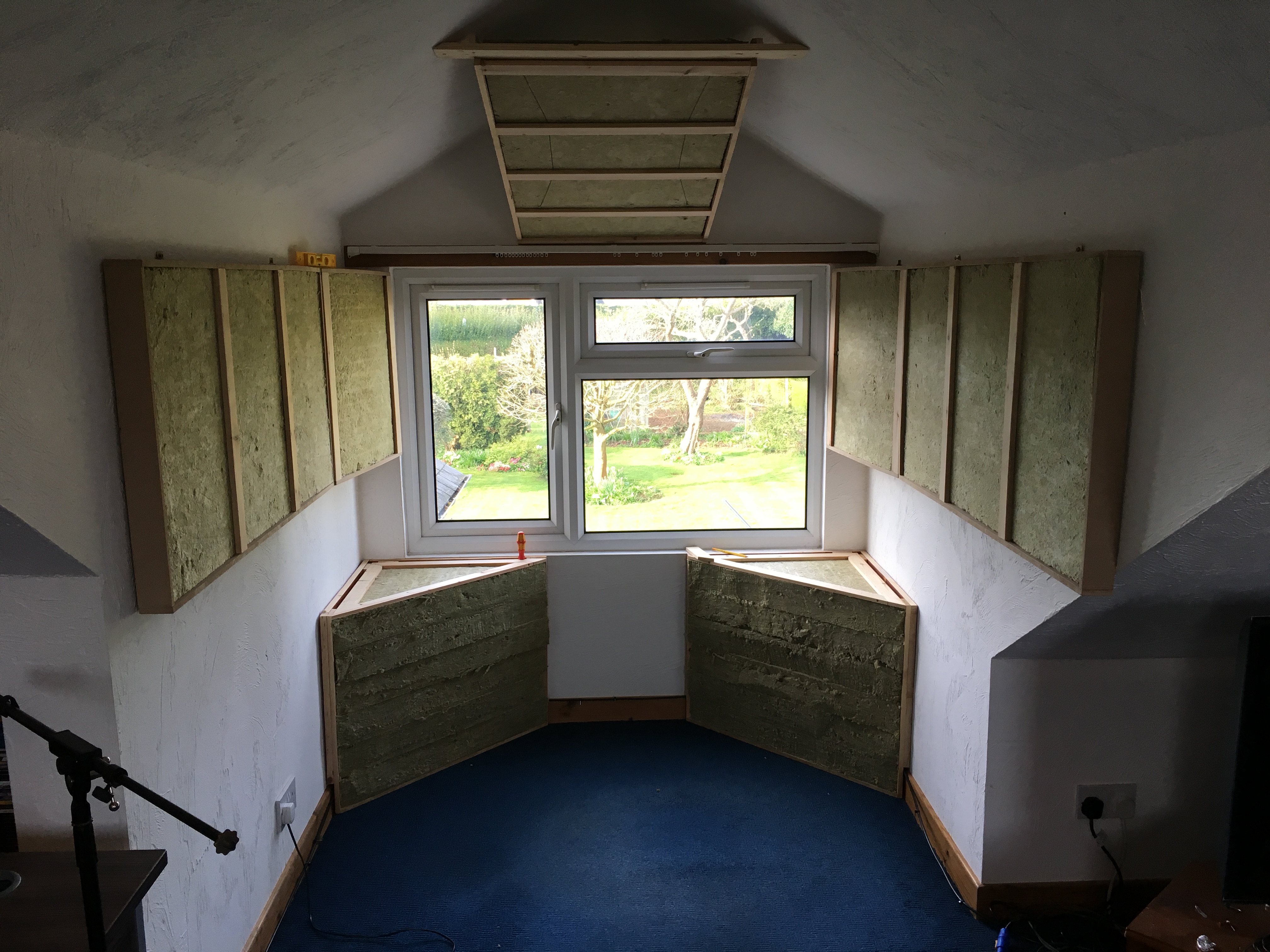 Shorter version for underneath: 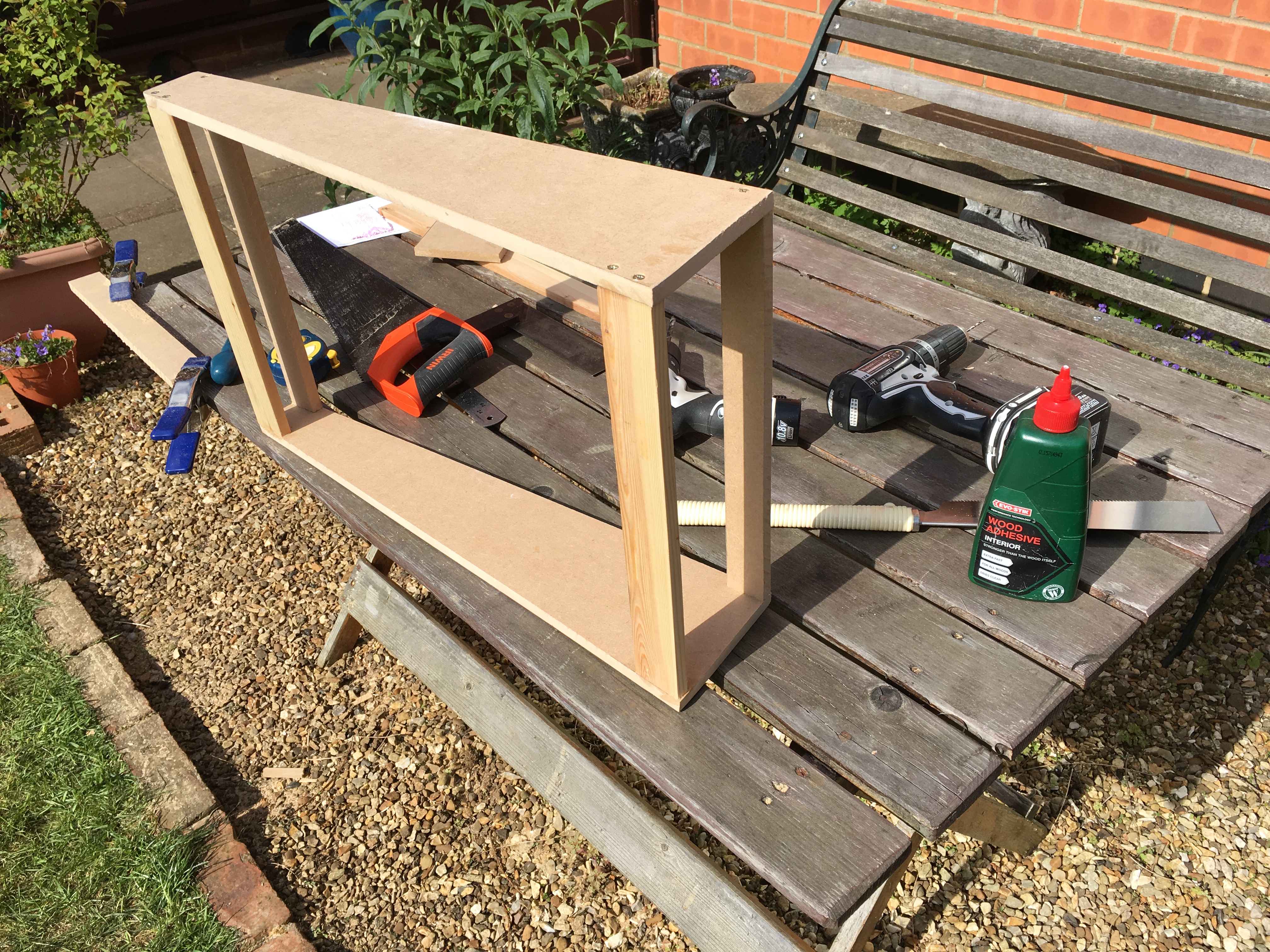 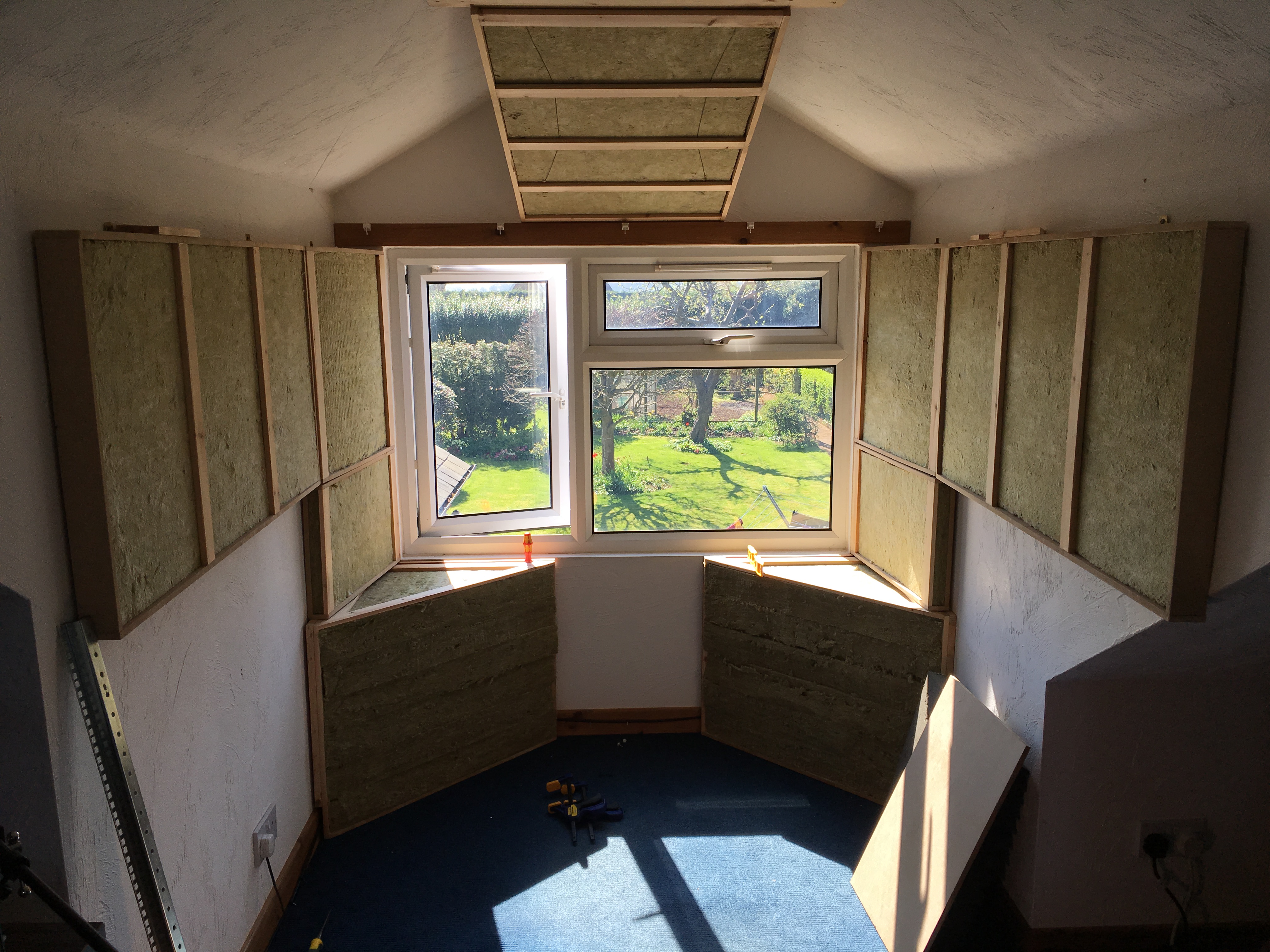 Nice work, and I'm sure a lot of people will find the constructional images very helpful.

Cheers, Hugh. I hope so, I've found the forums very useful over the years so it'd be nice if some help could go back the other way for a change!

Onto the next stage, finishing the sloped ceiling panels. I wanted the edge of the panel to sit completely flush with the ceiling rather than be bordered by a timber frame, and the angle of the pitch roof made the cuts rather interesting. I started out by marking out where the panel should sit, and taking some measurements along where I wanted the braces to sit. I like just cracking on with a saw as much as the next person, but some planning and paper definitely helped here. 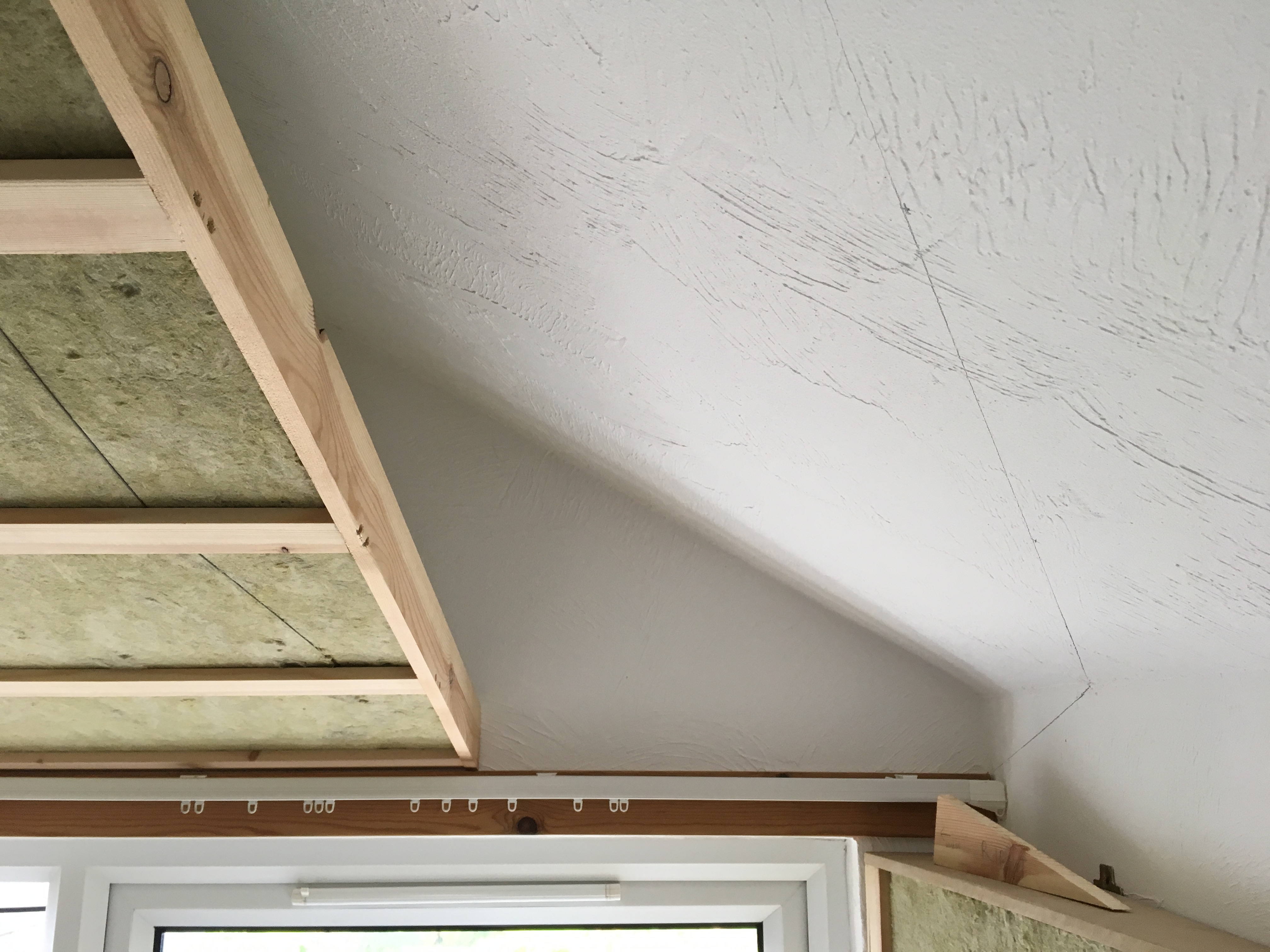 The simple half of the frame: 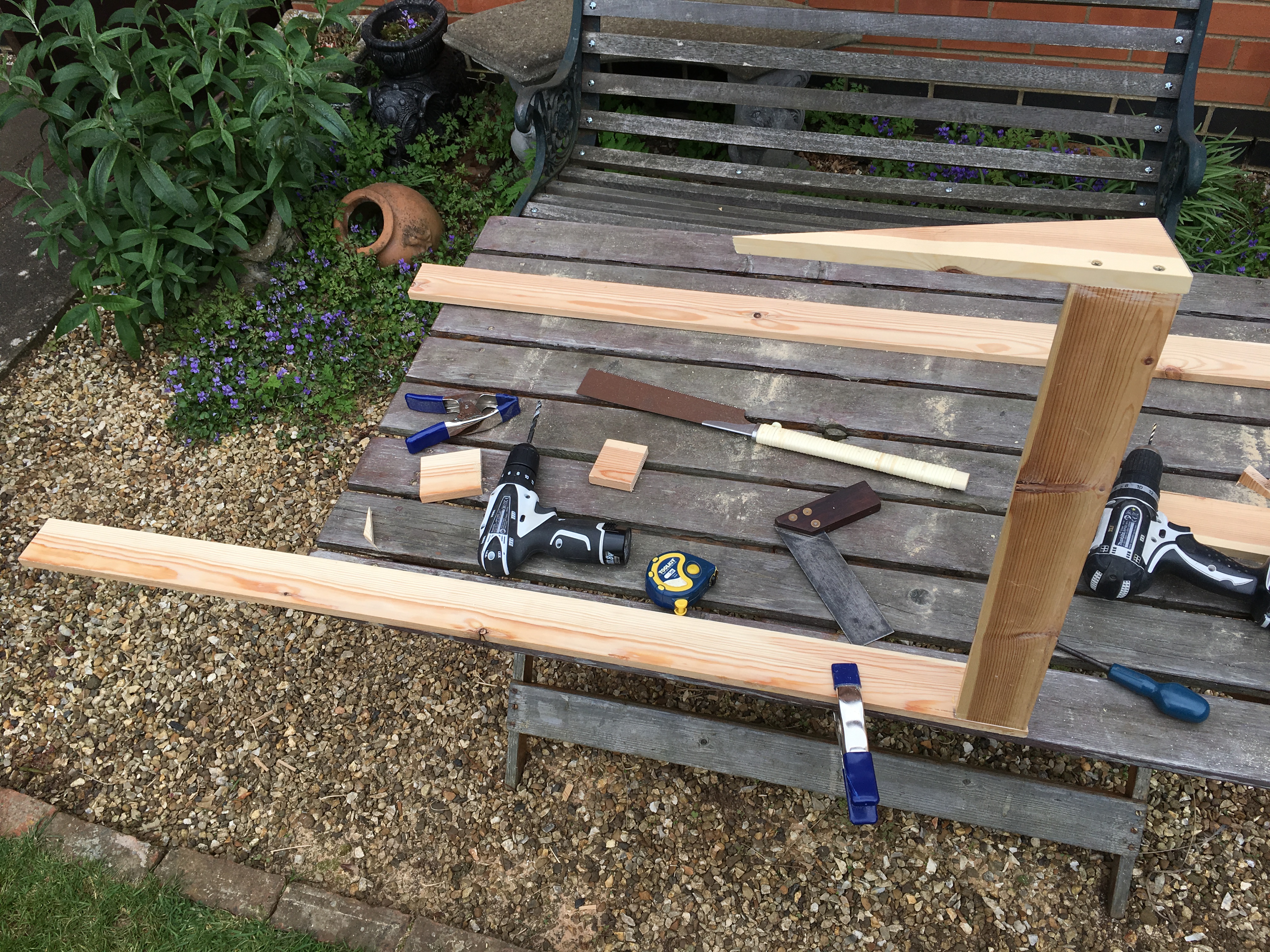 I then clamped that half in place, and double checked measurements for the braces.

Angles on the edge of the braces: 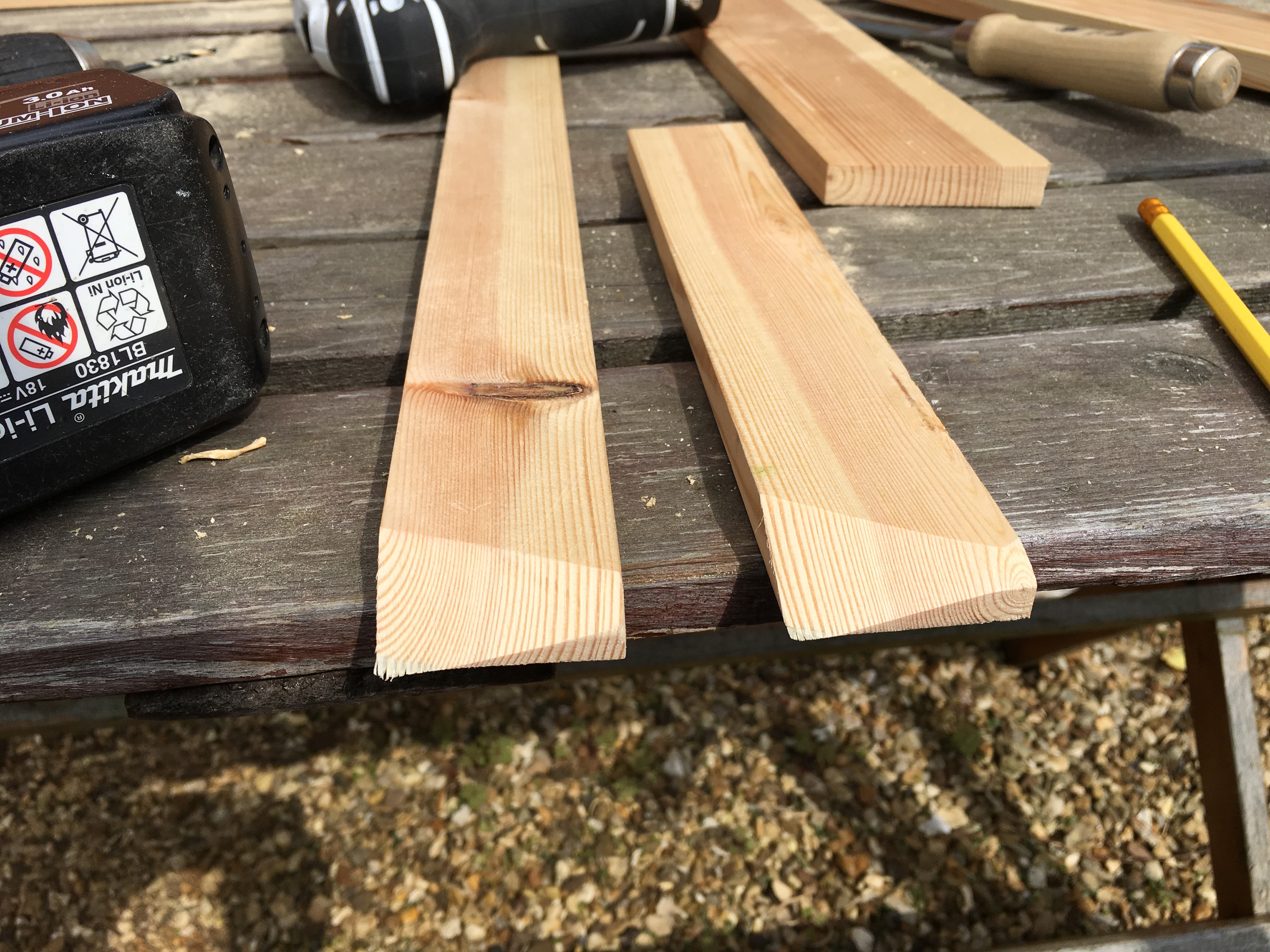 Because of the odd angles, I cut the braces slightly longer than necessary and then trimmed down the straight end once the angles were fitting nicely. This allowed a bit of room for error, and cutting off the other end at 90 degrees is a far simpler task than trying to shave a few mm off of the angle you've just got to sit nicely...

Another test fit with the braces attached, the longer one does fit, but gravity is doing its bit. Honest: 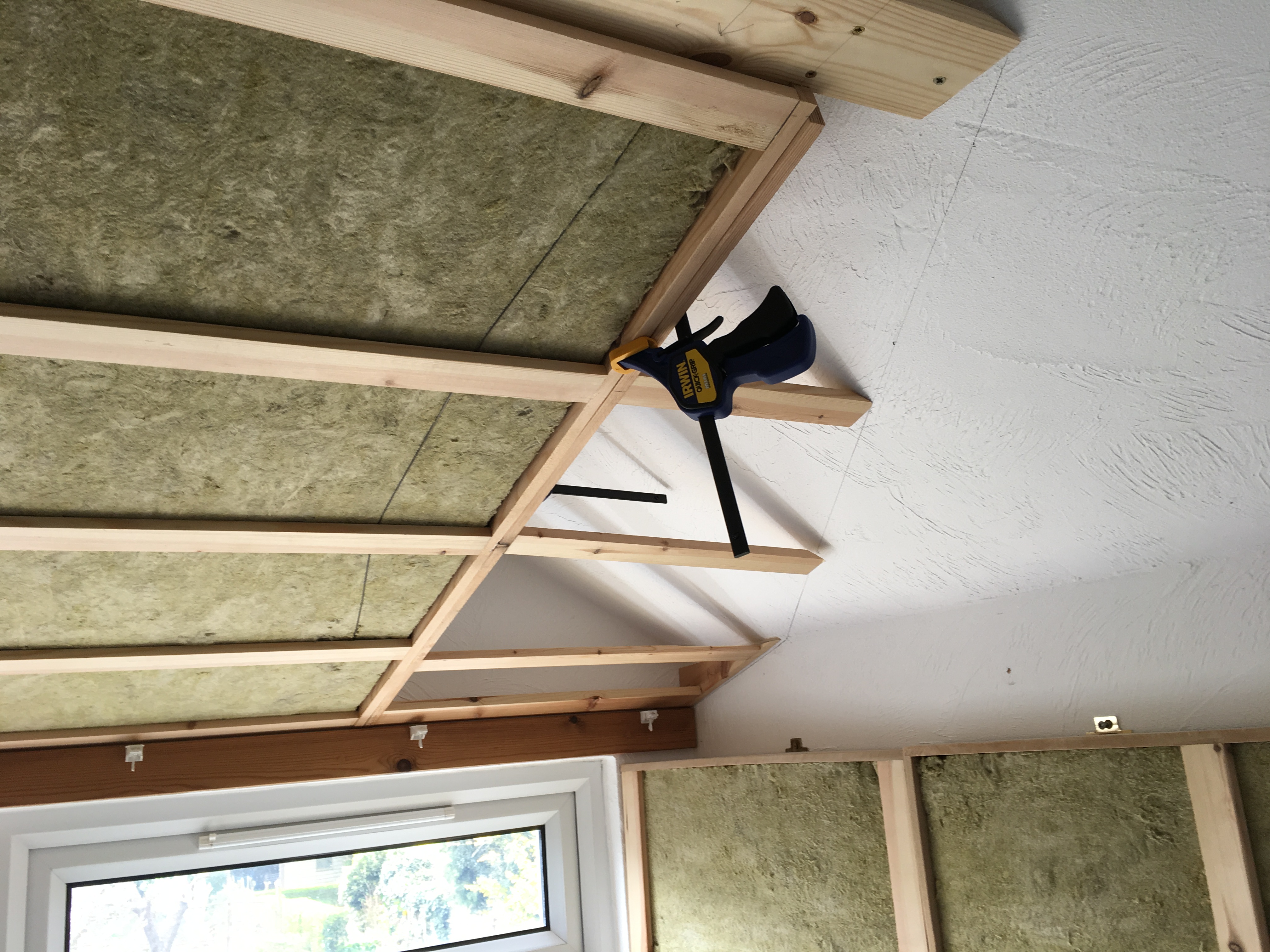 You can never have too many clamps: 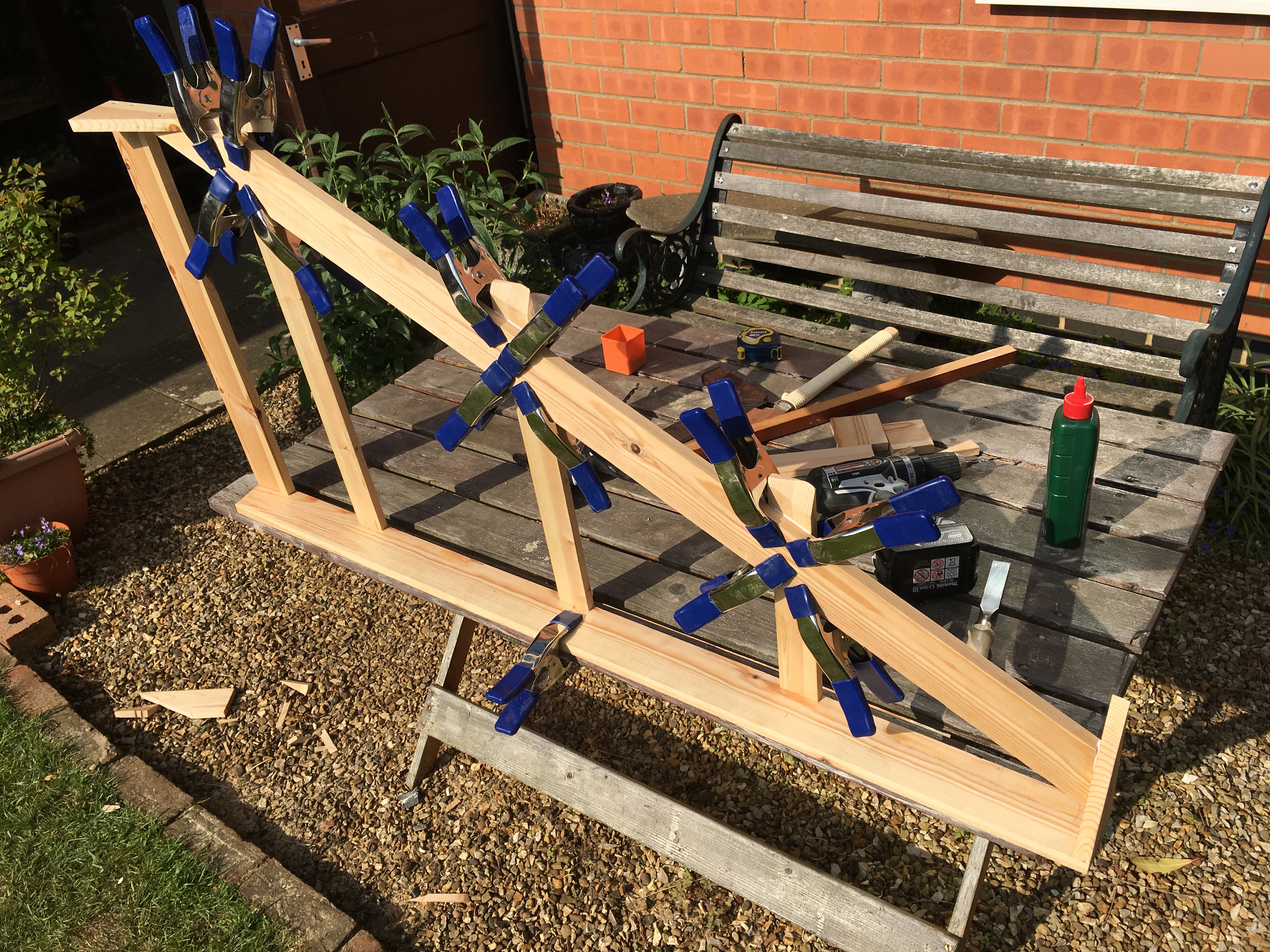 A couple of shots with the rockwool in: 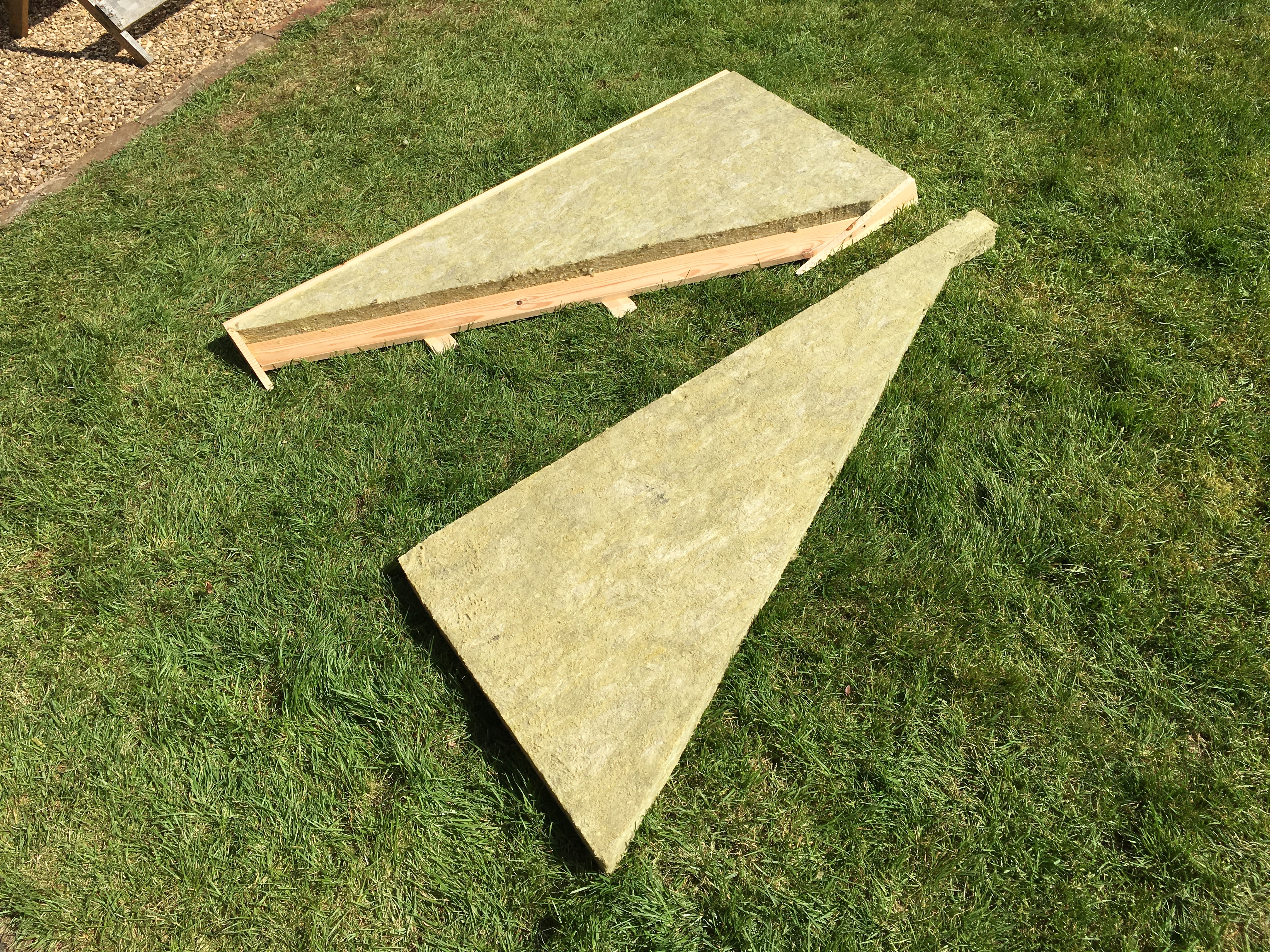 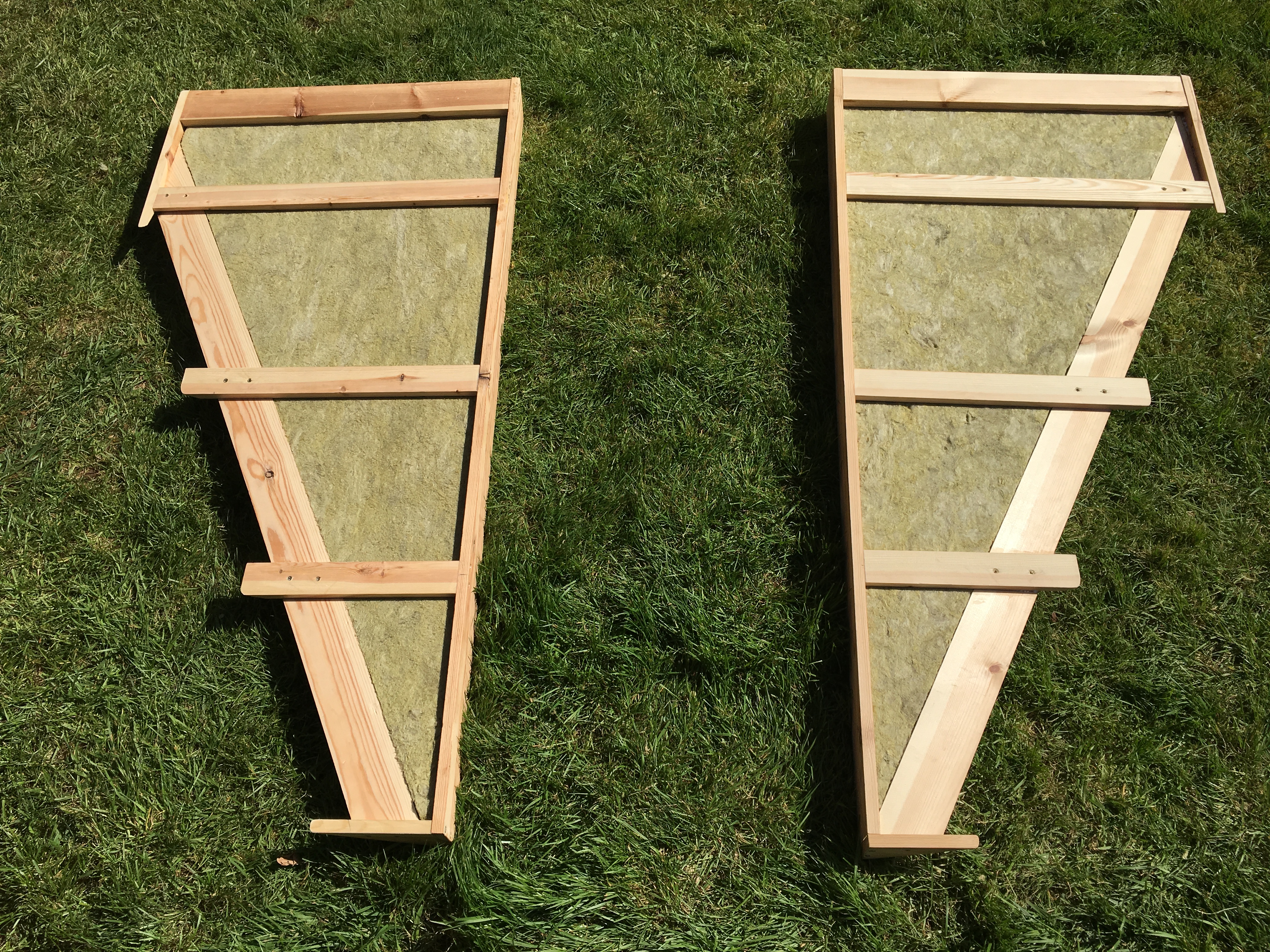 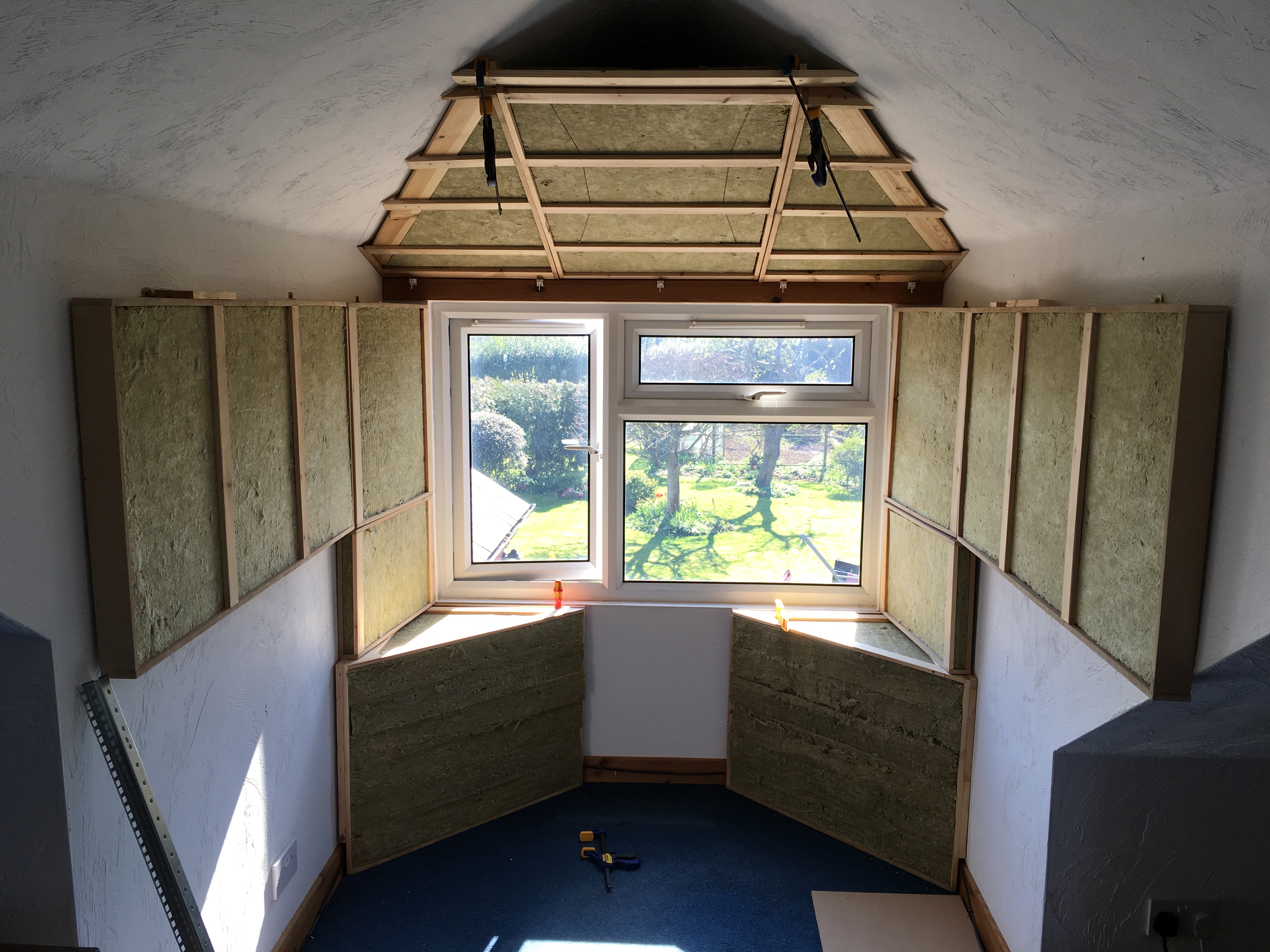 These came back down as they were getting fixed together and placed up as one panel once I'd got the fabric on. I also got another few slabs of rockwool behind them before fixing them in, so at the deepest end theres around 250mm.

Luke W wrote:You can never have too many clamps:

Looks very nice and I expect it sounds fine. You've set up significant treatment symmetrically left to right, and the odd room/ceiling angles should help disperse standing waves. If you get a chance you should try Room EQ Wizard to view frequency and time domain performance. Really helps to see just what is going on at the primary listening position and a few feet around it. You might get some rear reflections from the windows which was an issue I had until I added the hanging panels I showed in the Studio SOS article in April (2019). It does cut out the nice view and natural light, but in my case I wanted the room light-tight for photo work, so I didn't mind! In your room, heavy drapes might do the trick if you find any comb filtering issues from rear reflections, and you could open it when you're noodling around with your guitars and don't need mix/mastering level room response.

I hope you really enjoy it!

Thanks, Dennis. I'm planning on giving REW a go out of interest, I'd like to have measured the room first as well to get a comparison but my lack of patience got the better of me. The window has got some curtains now, but any good that's done has probably been reversed by the two screens! I've made sure they're back behind the monitors as much as possible to minimise any issues, and it seems to be a good compromise. There's still two skylights in the rear wall/ceiling so natural light is still available.

Folderol wrote:That's some serious carpentry there - those angles would drive me off screaming

Thanks, I find that things like this always look more daunting than they are though. Measure twice and all that...