Having found the BK Passive to be out off stock anywhere I can find in the UK I'm contemplating building a passive controller, My needs are very simple, two stereo sources (one would suffice) one stereo and one mono summed output and a mute button. Now debating whether to go for a decent quality pot or a budget stepped attenuator, I'll probably go for a Alps pot but other suggestions welcomed.

Also, a schematic for something similar would be useful. I'm pretty confident I can draw one out and I've found this one (©https://www.christiansteinmetz.com) which misses out the monitor switching and mono summed out but otherwise looks pretty straightforward. 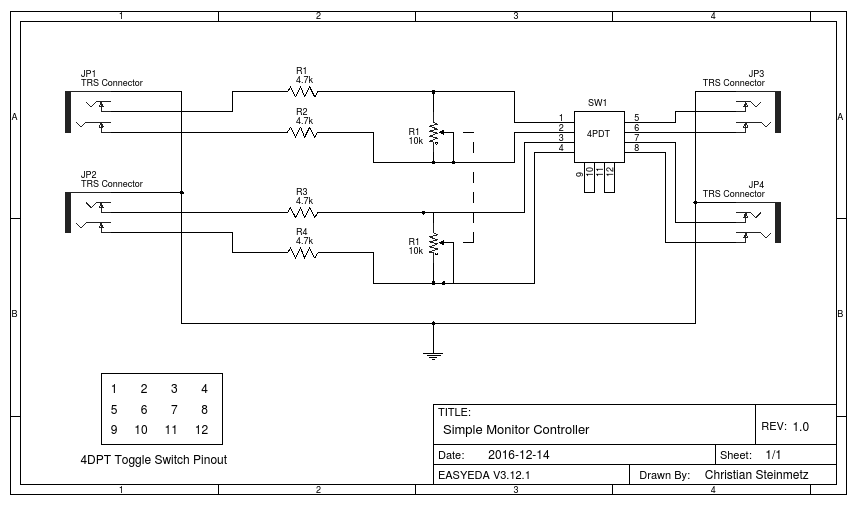 The passive pot arrangement shown in your schematic is a much better idea than the four-gang pot Dave mentioned (assuming he means the pot per leg technique; there is a more complex arrangement with variable series and shunt arms that use a four-gang arrangement which is difficult to build for sensible money). The version shown above is nice in that it maintains an accurate signal balance and doesn't introduce an unwanted ground reference... and it needs a dual gang rather than quad gang pot!

But if you want a mono sum as well as the stereo through path, things get complicated as you either have to go active, or use a transformer with dual primaries... And active is much cheaper and arguably much better...

As to the pot versus switched attenuator decision, the latter wins every time for me. Several companies sell pre-built 24-point switched attenuators, but I have always been impressed with the offerings from DACT who offer not only the switches, but also very nice buffer amp circuit boards which the switches can be mounted on directly, which makes the DIY considerably easier. DACT offer a suitable PSU board too, so you'd just need to do a bit of wiring and drill suitable holes in a box!

Chuck a couple of THAT balanced input receivers and balanced output drivers at each end of the signal path, some source select switches, and some passive mix resistors feeding the mono output driver, (or better still, a proper virtual earth mixer around an op-amp) and you have the basis for a very high quality monitor controller. It wouldnt take much extra effort to provide mono and stereo difference monitoring too.

I reviewed a source of ready-made balanced receiver/driver boards complete with TRS sockets not that long ago which could be run off the same DACT power supply too. https://www.soundonsound.com/reviews/sparkfun-breakout-boards

Yes Hugh I can see the circuit is in some ways better than a 4 gang pot but I am wondering what the law is going to be like? No taper is suggested on the schematic.

Thanks for the link to those modules, I might get a set in in preparation of my monitor purchase although that has been put back six months or more due to an unexpected expense.

Thanks guys, I'm assuming the law/taper will be more or less defined by the pot chosen? The design uses the Alps Log pot I mentioned above though I guess any 10k Log pot will work.

The mono output is purely for my Avantone 'grotbox' so wouldn't a simple restive summing network work?

As you probably know I use an X32 Compact at the centre of my studio so I'm thinking of a monitor controller that allows me to mute the speakers but still listen on headphones* (from the desk's headphone outputs) as a simple way of working when I'm recording alone). It is possible to do similar using monitor buses but I struggle to motivate myself to play/record music as it is and get too easily distracted by playing with the tech so am looking for simple 'analogue like' solutions.

* the monitor section of the X32 does not allow this unless you send to the monitors from the main L/R bus, but channel solo only goes to the control room/headphone bus so not optimum.

Sam Spoons wrote:The design uses the Alps Log pot I mentioned above though I guess any 10k Log pot will work.

The mono output is purely for my Avantone 'grotbox' so wouldn't a simple restive summing network work?

No. The input impedance of the grot box will be relatively high which means there would be a significant risk of crosstalk between the two channels via the resistors, so your stereo outputs would tend towards dual mono! Active buffering or transformer isolation of the feed to the summing resistors would avoid that risk completely, as would a virtual earth summing amp. But without one of those solutions the only alternative would be to use pretty high value mix resistors, and in that case the summed mono output level would then end up 30 or 40 dB down. Whether that would be acceptable for your situation depends on how much gain is available in the grot box. It obviously wouldn't be acceptable in a commercial product.

I was thinking the mono sum signal path would be switched out of circuit when the main monitors were active?

Will try to draw out a schematic tomorrow...

Ah yes, okay, that would work. I had speaker switching at the outputs in mind, but you could arrange to switch feeds from the left/right outputs across to the passive summing network instead.

Ideally, the switching should also ground the left/right outputs to prevent noise from the left/right speakers (and ground the summing resistors when not in use for the same reason) and you will still lose a bit of signal level through the passive summing, of course. A 4PDT switch would do it I think.

If you're going to use the passive attenuator schematic you linked above, i think it might be possible to use the input buffer resistors on each leg as the summing resistors too, but linking the two hot sides for both channels (and the two cold sides) to feed the hot (and cold) balanced mono output. The two sides of the volume pot would then be in parallel, halving the value, so the attenuation range would change, but I doubt that would be a major problem in the circumstances.

Whichever way you cut it a passive controller is going to suffer from crosstalk, poor control law, level shifts, low input Z, high output Z, noise if the resistors get too high...All these factors can be traded off, one against the other but you cannot have it all good, all at once.

I knew all this of course when I bought the Mackie Passive but for my particular application, mostly source switching, it seems a good choice. What I did NOT know was how compromised it was in other respects and I still do not know the design rationale behind those compromises!

I continue to be amazed why some people are afraid a of a few op amps!

Sam, I had a quick sketch of an idea for your passive monitor controller, using the line feed resistors as the mono summers, and bypassing half the volume pot so that the control law and impedance remains roughly the same in both stereo and mono modes.

The minor complication is that the stereo/grot box switch needs to be a 12-way changeover in order to mute the unused outputs properly at the same time as routing the sum signals appropriately. There are 12-way push buttons... or you could use relays.

Anyway, for what it's worth, here's my sketch:

Thanks for taking the time Hugh, I'll have a close look. I do have a couple of 4 pole double throw toggle switches I was planning to use but could consider other options.

I think I'd do all the switching with miniature sealed relays. It means the unit would need a small power supply, but you could use a ready-made wall-wart for that.

After all this talk I’m regretting ordering my TC, sounds like passive is verboten from what you all say!

All I want to do is turn my monitors down!