We’ve got frosted glass on our studio door, the control room is in the basement, and the live room is upstairs, what I need is CCTV.

I'm nearly out of Brylcreem....

A little goes a long way with you these days.

Hugh Robjohns wrote: ↑Tue Jul 27, 2021 10:02 pm And then there are other practical benefits, like not accidentally knocking a faders open with your jacket sleeve...

For the benefit of any younger readers who may have wandered in. This is how we used to lay down those sick beats back in the day. So presumably all these microphones are fully open? (Other than channel 8)

Nope. That's a commercial music studio (Abbey Road?) using the faders in what has become the 'conventional way', not a BBC studio.

The real reason the BBC used faders opening towards the operator is entirely logical.

The early broadcast consoles, like this Type B desk, used rotary faders -- big knobs that you operated by rotating your wrist. They were fast and accurate, but you could only operate a maximum of two at a time.

Then someone came up with the idea of a 'linear fader' with a pivoted arm which dragged contacts across an arc of studs, each connected to a chain of resistors to make an adjustable balanced attenuator. (Note the two microswitches which operate at each end of the fader travel.)

This arrangement allows a lot of faders to be placed next to each other so that several could be operated with separate fingers, allowing multiple channels to be balanced simultaneously, and allowing far more channels to be controlled in a compact desk.

However, the fader knob obviously travels on an arc -- it goes up and over. Here is a Painton quadrant fader looking end on, with a BBC fader scale.

If that is installed into a flat console desktop, then the scale numbers on the side away from the operator (0-10) become invisible and so it's impossible to open the fader accurately to a particular mark because you can't see it.

But if the fader is configured to open towards the operator, it becomes very easy to open to a particular setting because that's marked on the side facing the operator.

Standard BBC practice was to use 23 (the scale goes up to 30) as the unity gain point on the fader. During rehearsals the operator would 'take levels' and note down the required fader setting on the script -- 20, 23, 27 or whatever it might need. During the recording/broadcast they would note the required value from their script for an upcoming source, place their thumb on the scale in the appropriate position, and be confident that they would open the fader to exactly the right mark every time. The up-and-over action also worked very well with the human wrist -- it is a very natural movement.

EMI also used Painton quadrant faders, but with a different scale and in the opposite direction. The scale had 'Out' at the near end (off) and went up to (I think) +20 at the far end, with ) at the unity mark. 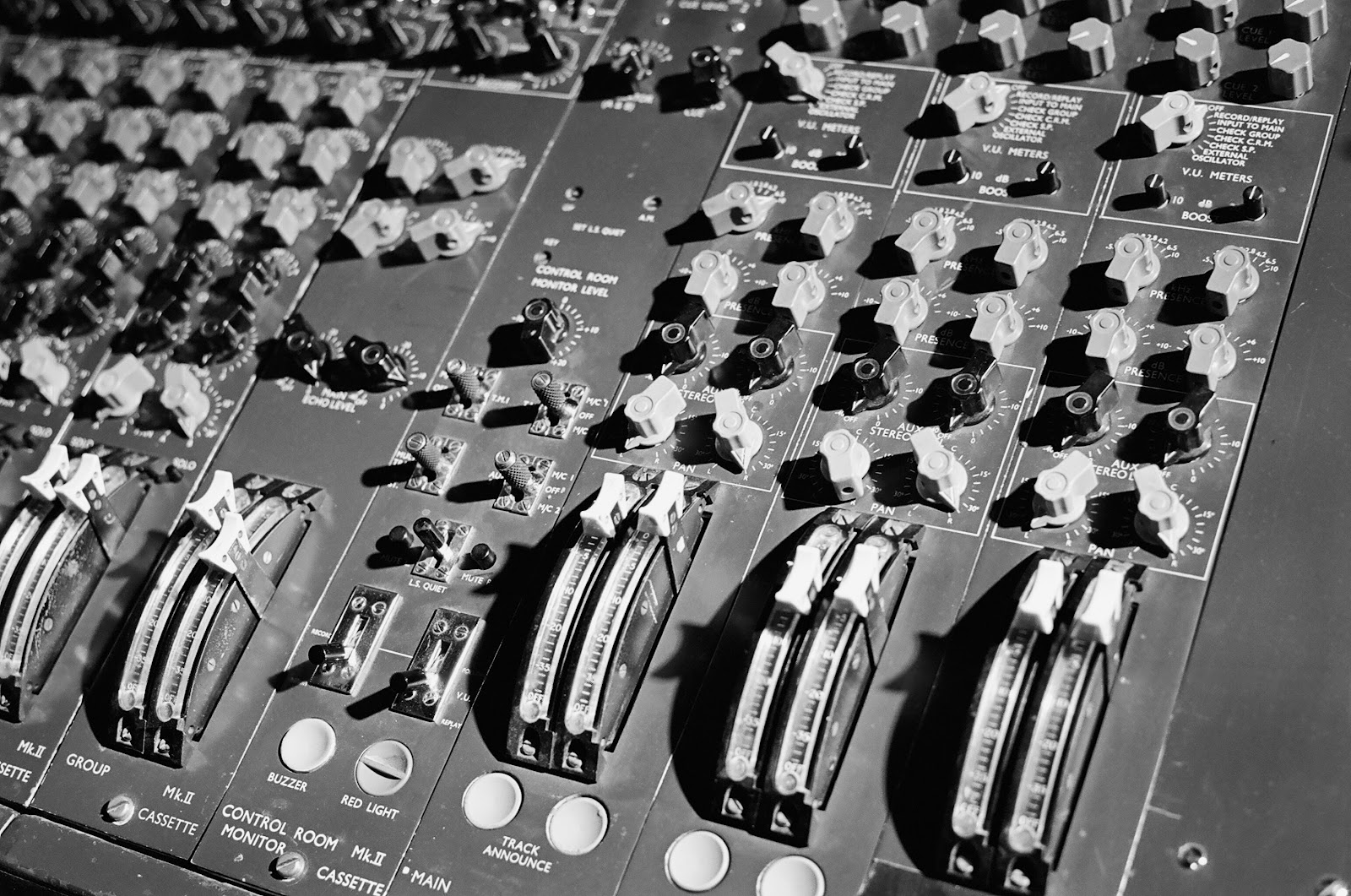 Another nice feature of those Painton quadrant faders was that they could be fitted with lightbulbs at each end to illuminate the perspex cover. That could be used to indicate active channels or, when different colour bulbs were used, to indicate channel group routing (or other functions). 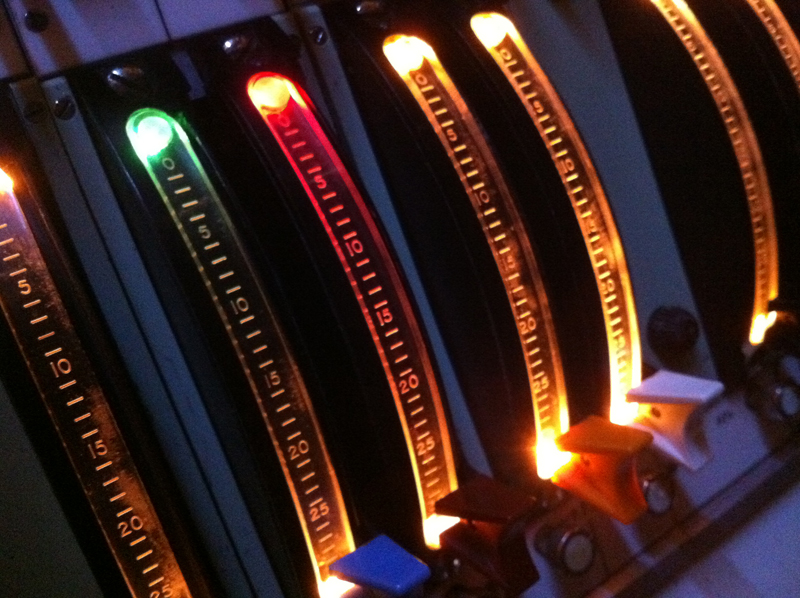 This was over forty years before Studer decided to 'invent' the idea of coloured fader slots to indicate channel routing etc, and patent it as 'FaderGlow'... (Now also seen on some Soundcraft digital consoles too)

Music Wolf wrote: ↑Wed Jul 28, 2021 8:01 am
For the benefit of any younger readers who may have wandered in. This is how we used to lay down those sick beats back in the day.

I’m trying to pin down those large monitors, I see a Quad 33/50e under the right hand speaker, but can’t work out what those monitors are.

Fascinating! Something new every day etc

I have no idea what I'm doing.

Thanks for the info Hugh. Fascinating stuff indeed.

I’m definitely going to have to try it out. 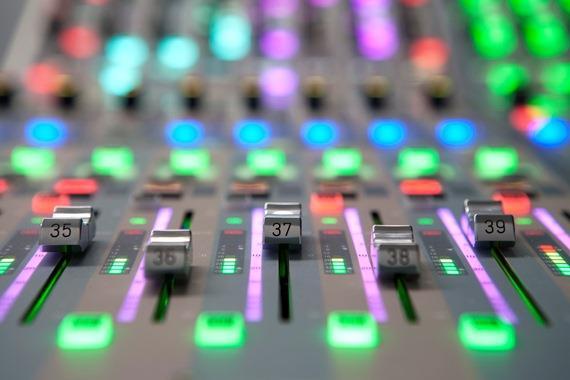 My guess would be Altec Lansing 605A 'Duplex' monitors 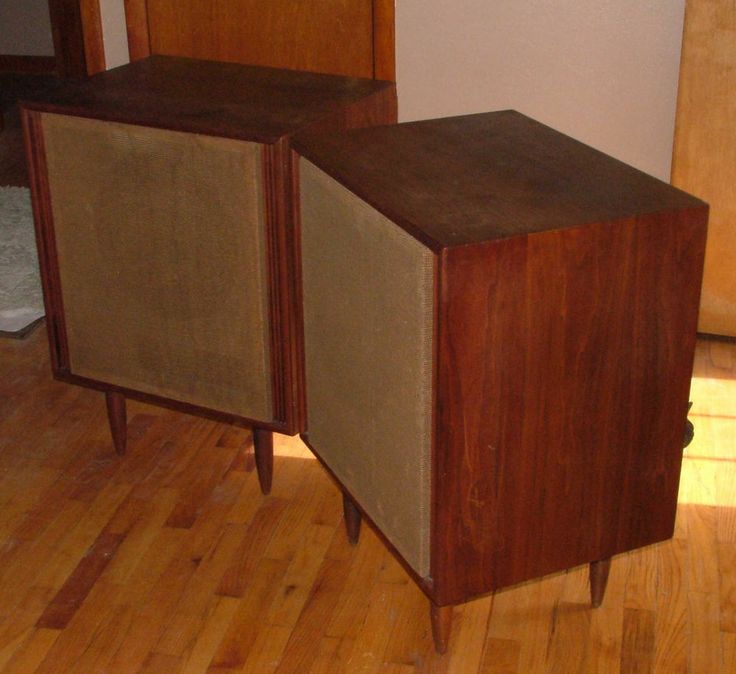 Comprised a 15-inch woofer with a mid/treble horn. Used at Abbey Road in the pop music studios (2/3 -- and that picture looks to me like it's Studio 3) from the 1960s.

I don't know what the current situation is with Calrec, but I believe Studer tried to prevent Calrec from using their coloured ID strips alongside the faders by claiming the patent they somehow were granted on their own 'FaderGlow' system covered Calrec's system too because it was conceptually similar (but physically completely different).

Studer's engineering of the FaderGlow system is quite clever and typically Swiss. But I still struggle to understand how they could claim FaderGlow as a unique invention when the concept of electronically selectable coloured, back-lit faders or fader slots or fader escutcheons, as an aid function identification, pre-dates their design by nearly fifty years, and with at least four practical implementations of similar schemes in existence in the UK alone!

The first implementation of the idea that I know of was with the Painton faders, as already discussed. The next I know of was when SADiE introduced coloured virtual fader slots to indicate different fader automation modes in V3.0 of their DAW, which was around 1996.

One of the nicest implementations of the concept of changing fader colour to indicate function was from Audix Broadcast (UK). They showed a really clever and fully functional prototype system in 2001 where the actual fader knob changed colour. Sadly, AFAIK no commercial product was ever made with their technology.

Calrec's system on the Apollo desk (as in the image above) was around the early 2000s, as in your picture and it used a strip of multicoloured LEDs running alongside the fader slot.

(I don't want to have to maintain it though!

This is a section of a BBC Type D console -- the type I did my first live broadcasts on:

And here's a typical* channel module: 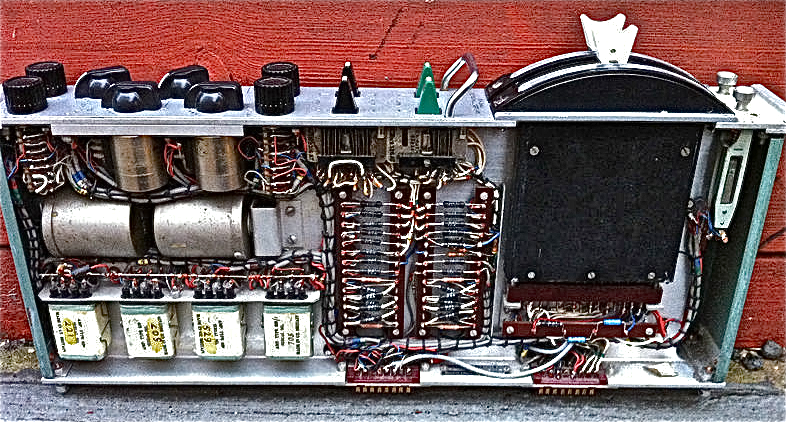 *This particular module is supposed to be from an EMI console, but it is uncannily similar to the BBC Type D...

Technical Editor, Sound On Sound...
(But generally posting my own personal views and not necessarily those of SOS, the company or the magazine!)
In my world, things get less strange when I read the manual...
Post Reply
72 posts