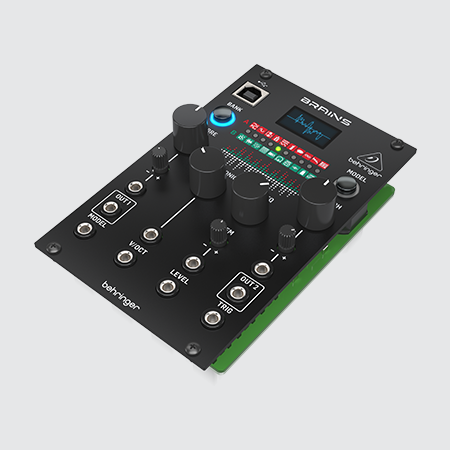 I’ve got a lot of Berry stuff, modules especially, but this really is too close to the knuckle for me, plus, it looks tacky, really tacky, the whole thing is like some sort of a morality test for buyers.

Arpangel wrote: ↑Sun Sep 12, 2021 7:33 am this really is too close to the knuckle for me, plus, it looks tacky, really tacky, the whole thing is like some sort of a morality test for buyers.

The following is a list of manufacturers I could find who make a clone of Mutable Instruments ’Plaits’:

Why is it only a problem that Behringer are making a clone?
Plaits is open source and available to anyone that wants to recreate / modify it.

My stance regarding their business practices has changed somewhat over the last few weeks. I used to hate the idea of them blatantly ripping off other people’s designs but I’ve realised that this sort of cloning is happening all over the industry and it’s not entirely fair that Behringer are the only ones taking any flak for it IMO.

Warm Audio, Black Lion Audio, Golden Age Project, Heritage Audio, BAE,
WES Audio, Summit Audio, Tube-Tech and loads more are making clones of gear that is still currently for sale by the original manufacturers. No problem there though… a lot of them even advertise in the pages of SOS.

I wonder if MusicTribe had branded the 1176 clone as Behringer rather than KT would there have been more outrage?

Loads of plugin manufacturers are cloning, or maybe more accurately emulating, but still using familiar GUI layouts that are unmistakable.

A company called Cyclone Analogic have been making clones of old Roland gear (TB303 and TR606) for years. Creamware and Studio Electronics made Minimoog clones. The list is endless.

It’s rampant, mostly legal as far as I can tell and it’s not just Behringer doing it.

That’s true, you’ve got a point there, I suppose it’s got a lot to do with the tacky appearance, AFAIC, it just doesn’t look classy at all.

Personally, provided a piece of kit does what I want, the crappier it looks the better as far as I'm concerned.
Firstly there's less likelihood of someone wanting to nick it, and secondly I love the look on peoples faces going from disdain to astonishment when they hear the results

... with the notable exception that MI's code is open source, so what you're comparing is effectively apples and oranges.

Behringer's overall business strategy is entirely reprehensible to me, but I feel that horse has been beaten to death here and anyone posting regularly in this thread ultimately doesn't care and isn't about to change their minds if what has happened thus far with Behringer hasn't done so already.

Ben Asaro wrote: ↑Mon Sep 13, 2021 2:32 pm
... with the notable exception that MI's code is open source, so what you're comparing is effectively apples and oranges.

Ah right. Yes that makes sense. So is the open source nature of the code just to allow people to modify it for use with MI’s hardware only?

Nope, the designer made it open so whoever wants to use the code, can.

Ok Ben, I think either I have misunderstood you or vice versa.

I mentioned in my first post that Plaits is open source. What is it about my comparison that makes it apples to oranges? Genuinely confused

Looks like the RD-9 may not actually arrive this year at all at this point, there's been another delay. Didn't they post pictures of boxes of the things a few months ago? I wonder if they're sitting on a container ship that can't be unloaded because of the backlog.

When it comes to music tech hardware, you're not alone. I pre-ordered a newly announced synth more than 2 months ago, as soon as it became possible to do so. Originally delivery was expected at some point in the last week but subsequent to an update from the supplier-to-my-vendor it's now been pushed back to mid November.

I suspect Eddy and me are on the same waiting list for one device!

I've also been waiting for another two pre-orders, one for at least 18 months (I've forgotten when I made the order TBH!), the other for six months-ish. It's a strange world we now live in.

But I can live with it. When they arrive they'll be nice surprises.

An Eagle for an Emperor, A Kestrel for a Knave.
Locked
1402 posts