a massive undertaking...with a nice view!

Looking brilliant, Eddy. I admire your tenacity. One thing I’ve learned from your experiences is that I’m NEVER going to undertake anything on this scale myself!

Thanks folks! Yes, it really is starting to come together now although there are a few fiddly things to go yet.

Later, once the studio is up and running fully, I'll be summing up with a number of thoughts, observations, lessons learned and related info. At present it's just a matter of continuing to put one foot in front of the other to get things to the point that equipment can start to be installed.

I'm pretty accurate when it comes to estimating the quantities of material to order for any given job but I'm terrible at predicting how long it'll take to do it. I really thought I'd be done in the first quarter of last year but looking back over everything to date I can't imagine how I thought I would at the time!

On the home stretch now and there's nothing particularly complicated to do but there are quite a few simple things which have kept me busy this weekend and will fill the available time over next few days.

Stepping back in time slightly, here are a couple of overviews of the space after the SoundMat Pro was laid but before I started installing the laminate: 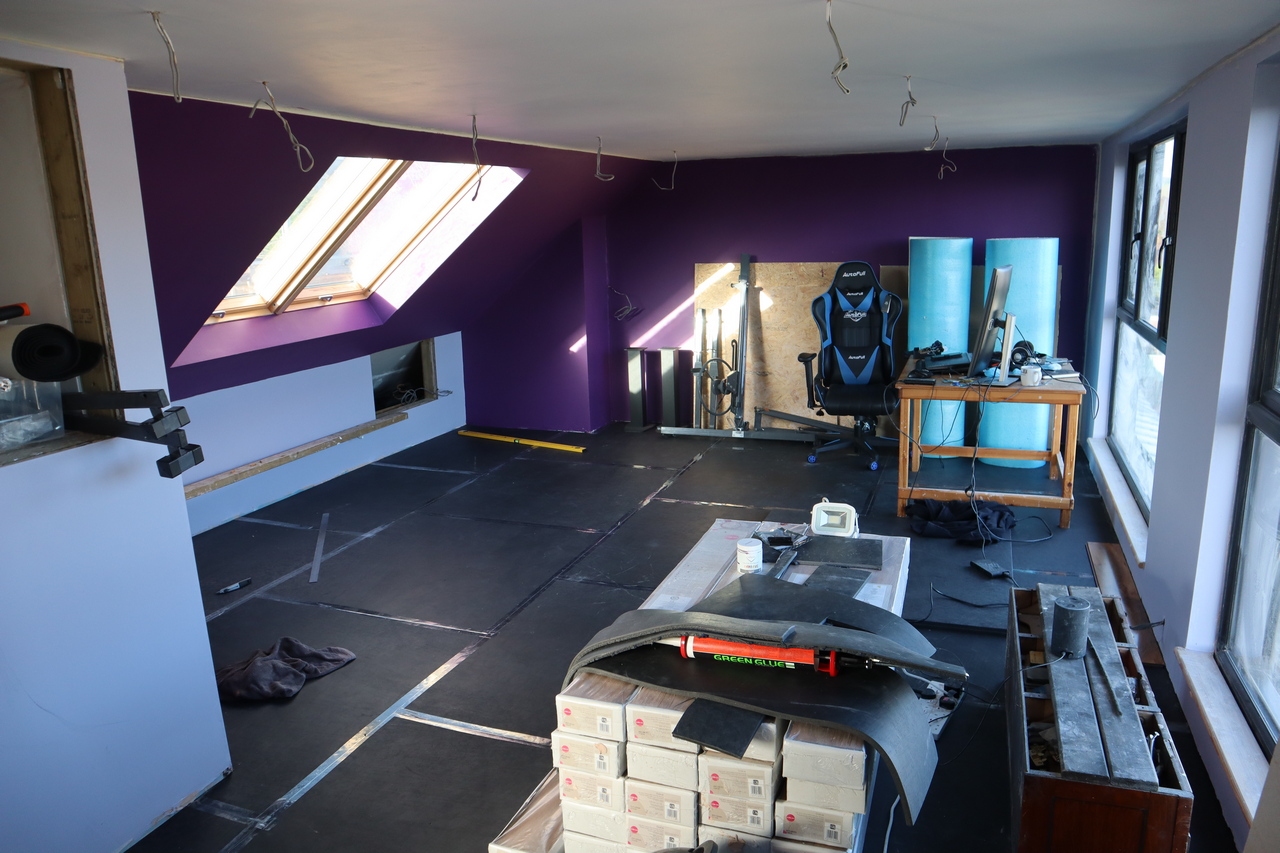 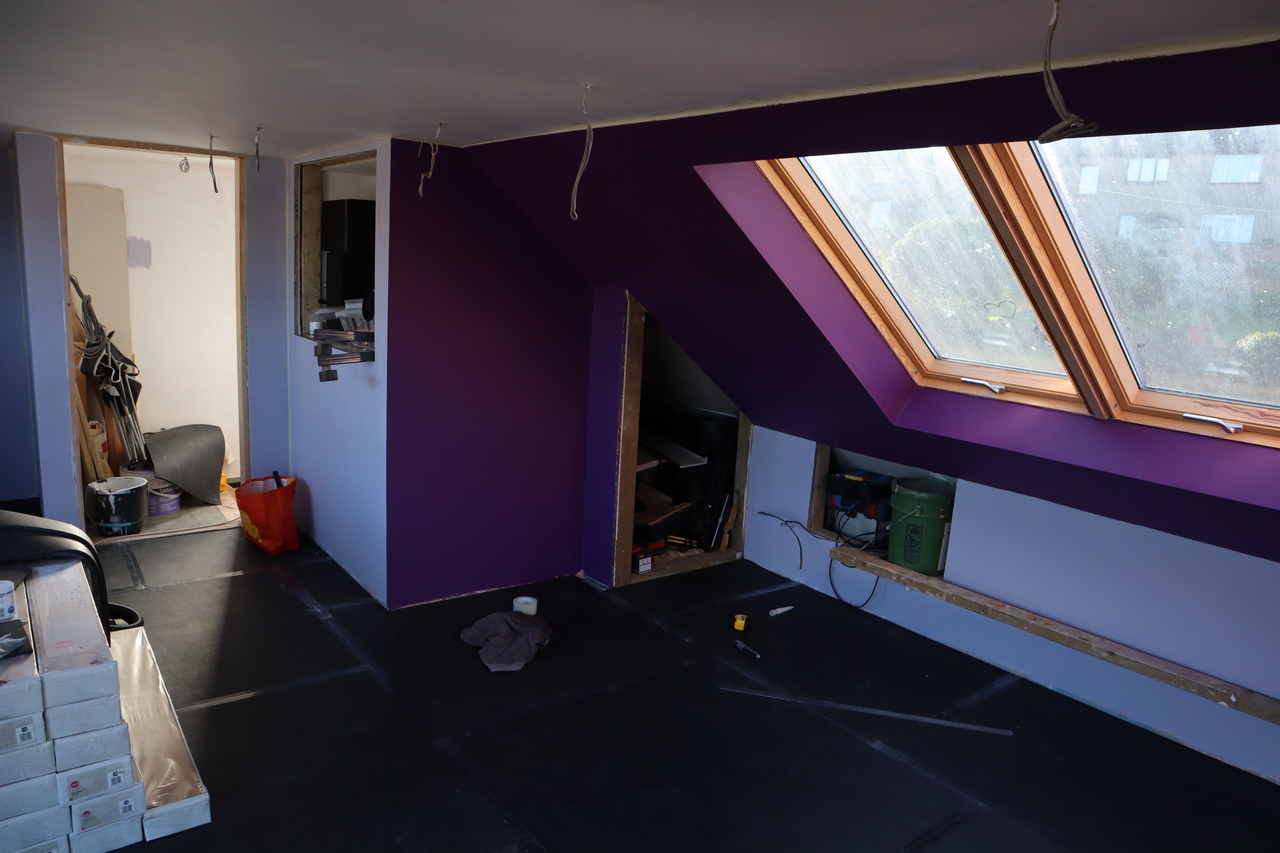 The images above show the five apertures that need to be filled, these being the door, the cupboard (over the stairs) next to the door, the storage door under the eaves and the two rectangular storage access hatches in the eaves.

I took a trip down to the local DIY store and came back with a bunch of 2-by-3 which I'm making the frames for the covers for all but the main door from, a load of splines which I'll be surrounding the plasterboard with (like a picture frame), skirting board, some doorknobs, a few tubes of adhesive and a number of garden-gate-style hinges.

I hung the door and attached the frame for the plasterboard to it: 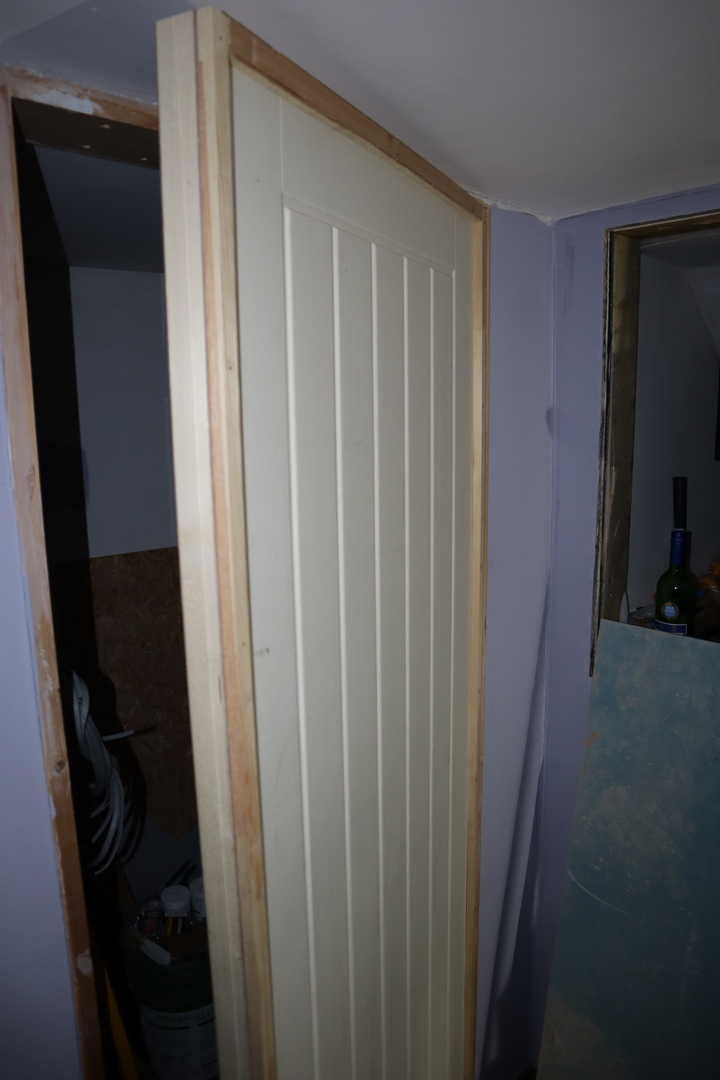 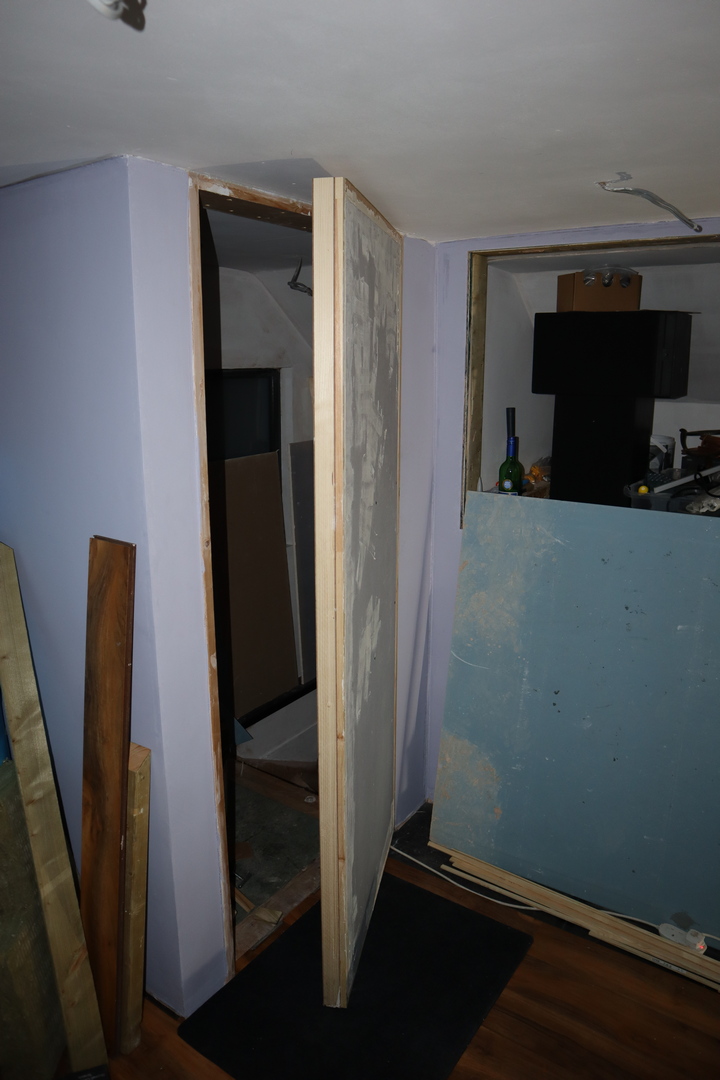 The door is a solid fire door, 45mm thick and weighs 32Kg. The plasterboard adds another 15mm and is backed with green glue resulting in a final solid construction that weighs 52Kg and is 6cm thick.

As it's so heavy I mounted it on four 100mm heavy duty hinges using proper screws as opposed to the cheap nasty ones that always get supplied with hardware.

It's also hung from the sturdiest side of the frame, which is heavily anchored internally to the main supporting column holding up the RSJ running the length of the ceiling.

Next I built the door for the eaves storage area. I framed it using the three-by-two; shown here resting loosely as I worked out the angles etc. 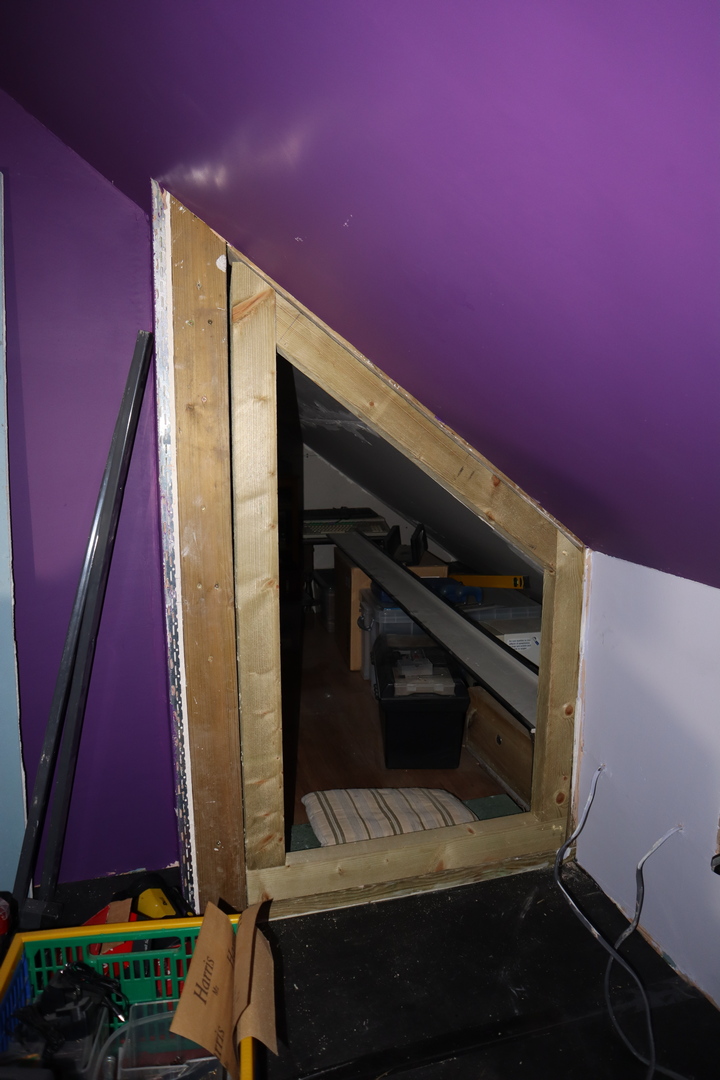 After screwing the frame together I backed it with 15mm acoustic plasterboard, packed it with RW3 and put in an internal piece of two-by-four, screwed and glued, to give me something extra solid to screw the long hinges into when it's hung: 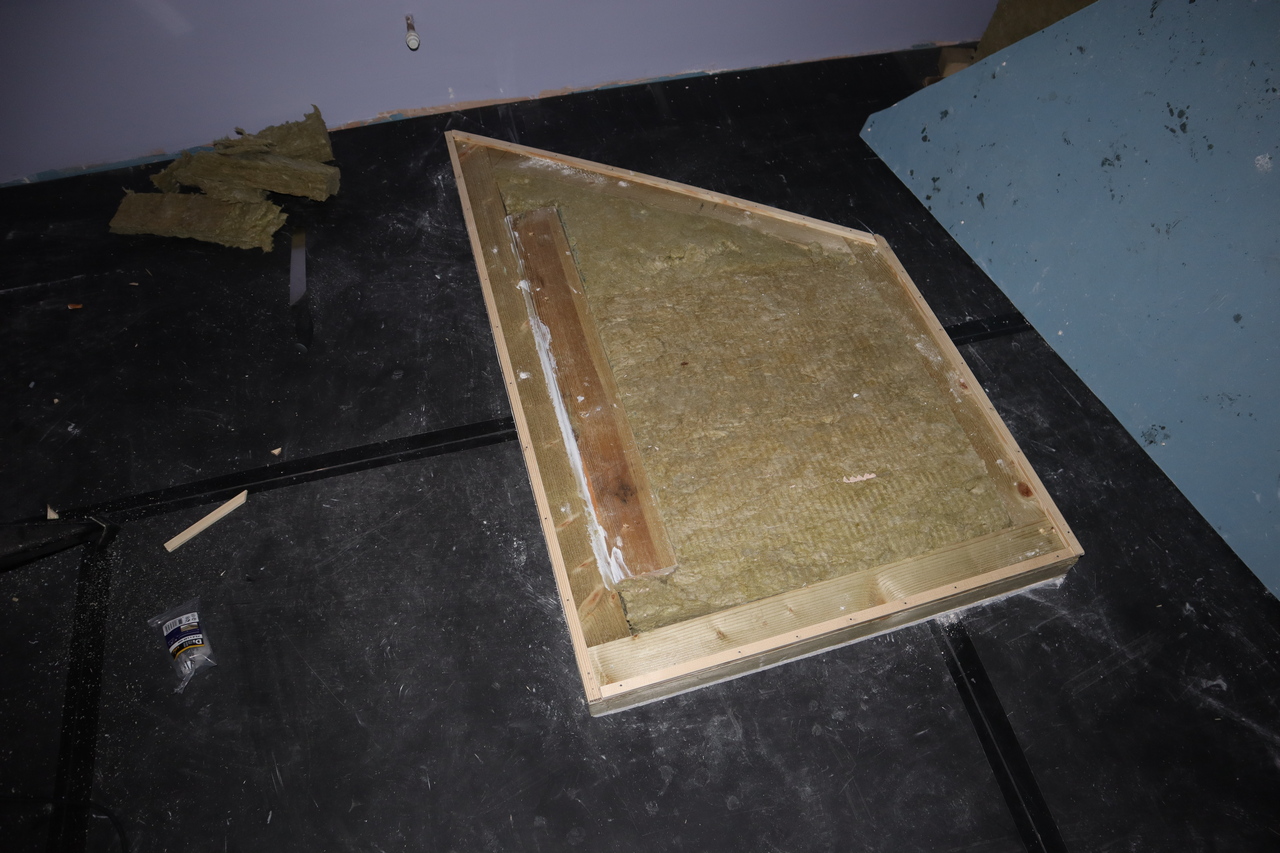 The above image also shows the spline around the periphery into which I added the front plasterboard: 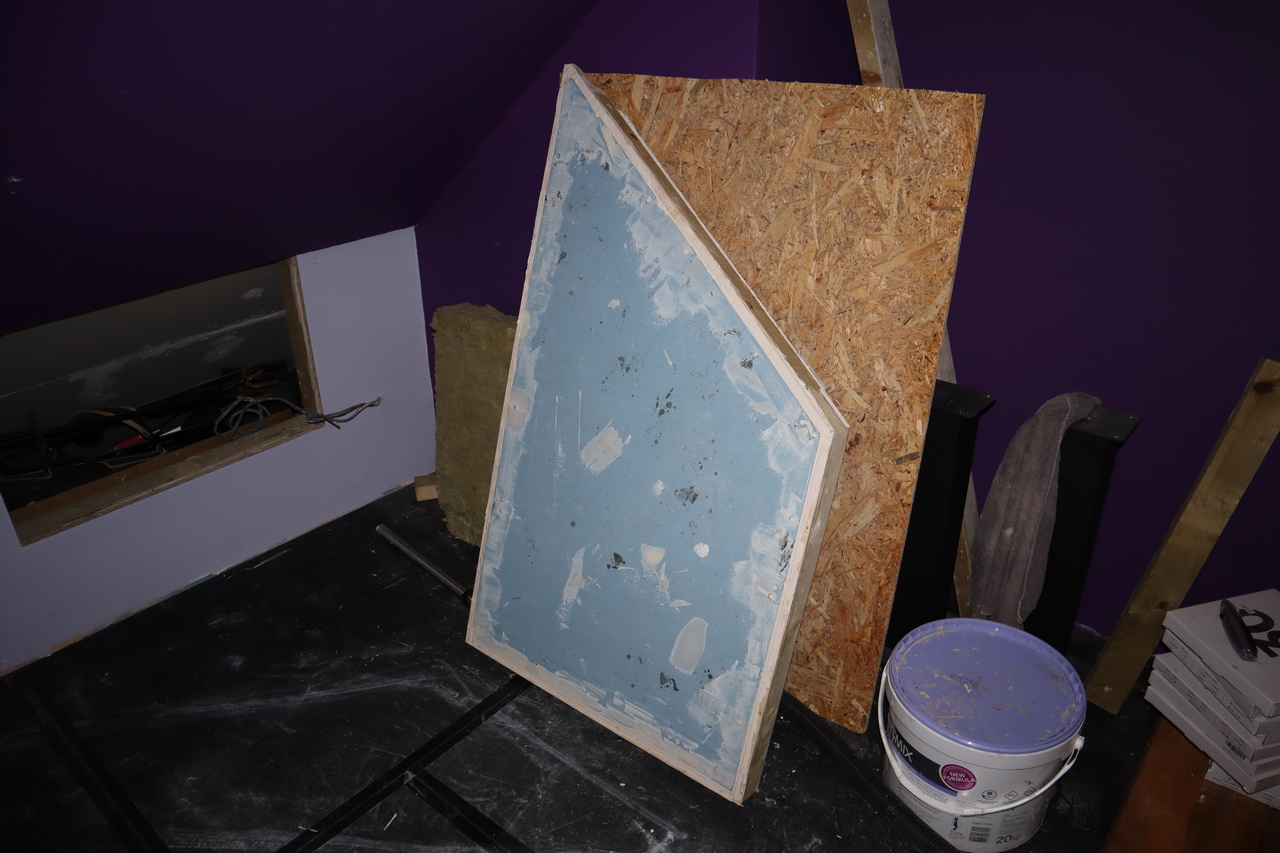 As I'll be doing with all of the doors, I've ensured no gaps using filler. It looks messy but is smooth and in any case it won't be visible once the final finish of plywood has been applied.

Below is the first storage hatch now lined with plywood and the frame for the hatch cover in the process of being put together. As before there is acoustic plasterboard on front and rear with RW3 in the middle. Here, I'm gluing in the blocks (also screwed) that will provide a good anchor for the knobs to be attached: 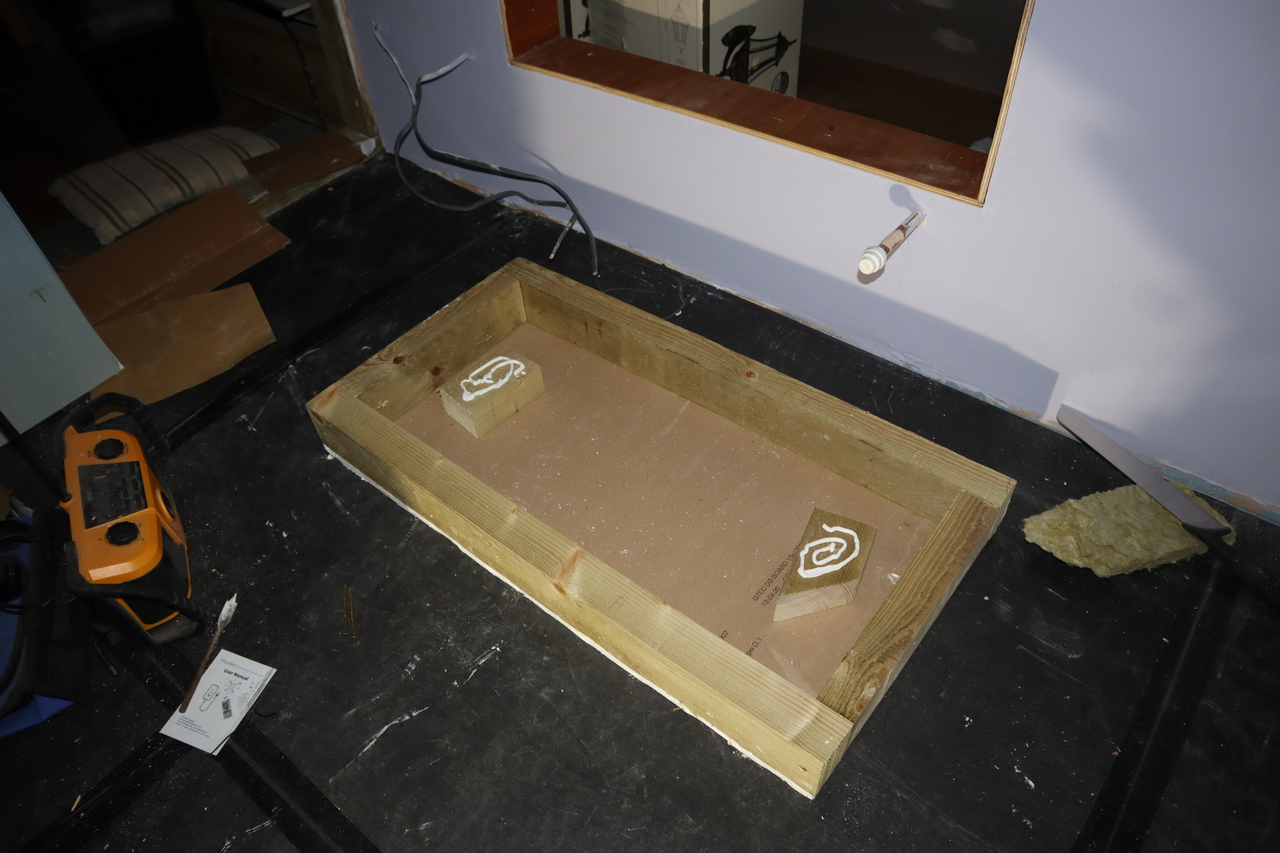 Nearly done; trimming the plasterboard to fit into the front recess made by the spline: 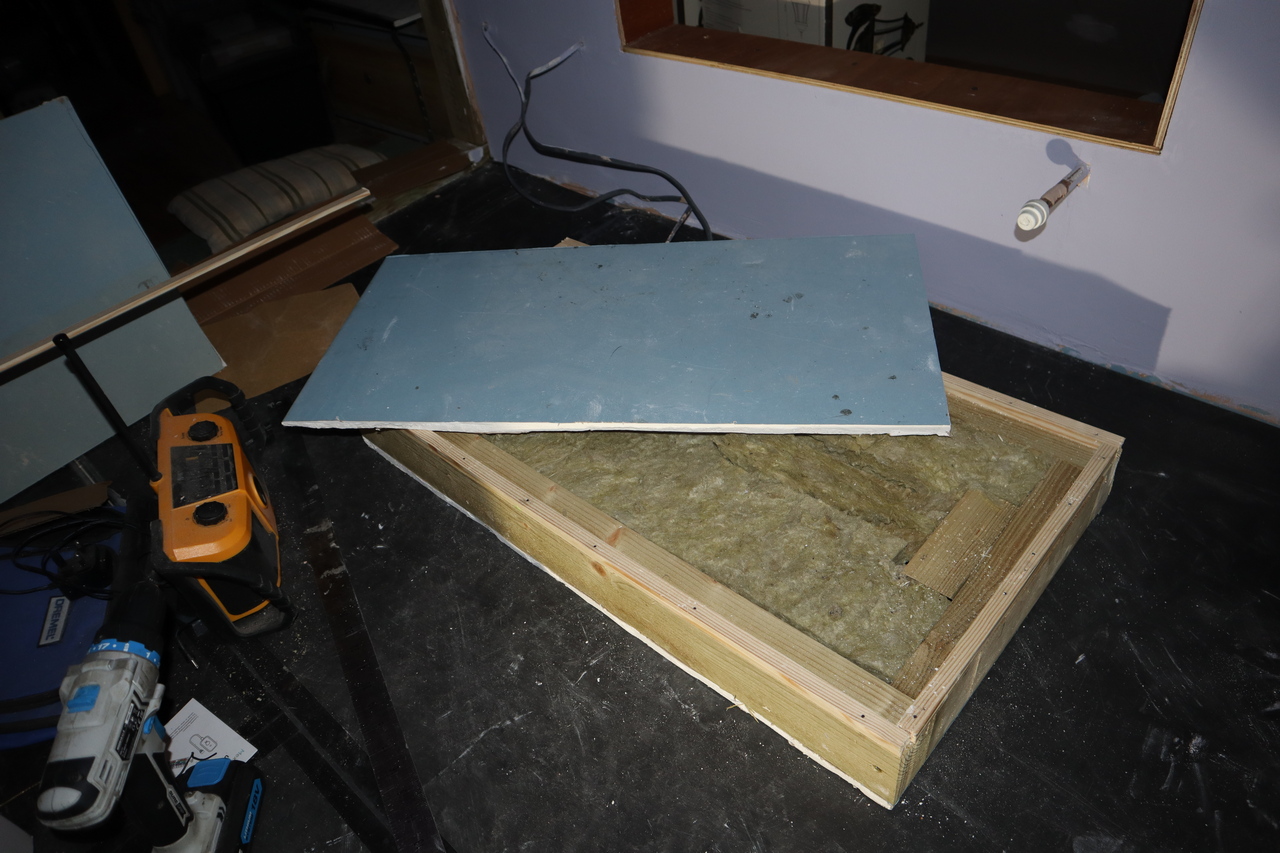 The resulting hatch albeit without any knobs or plywood on it yet: 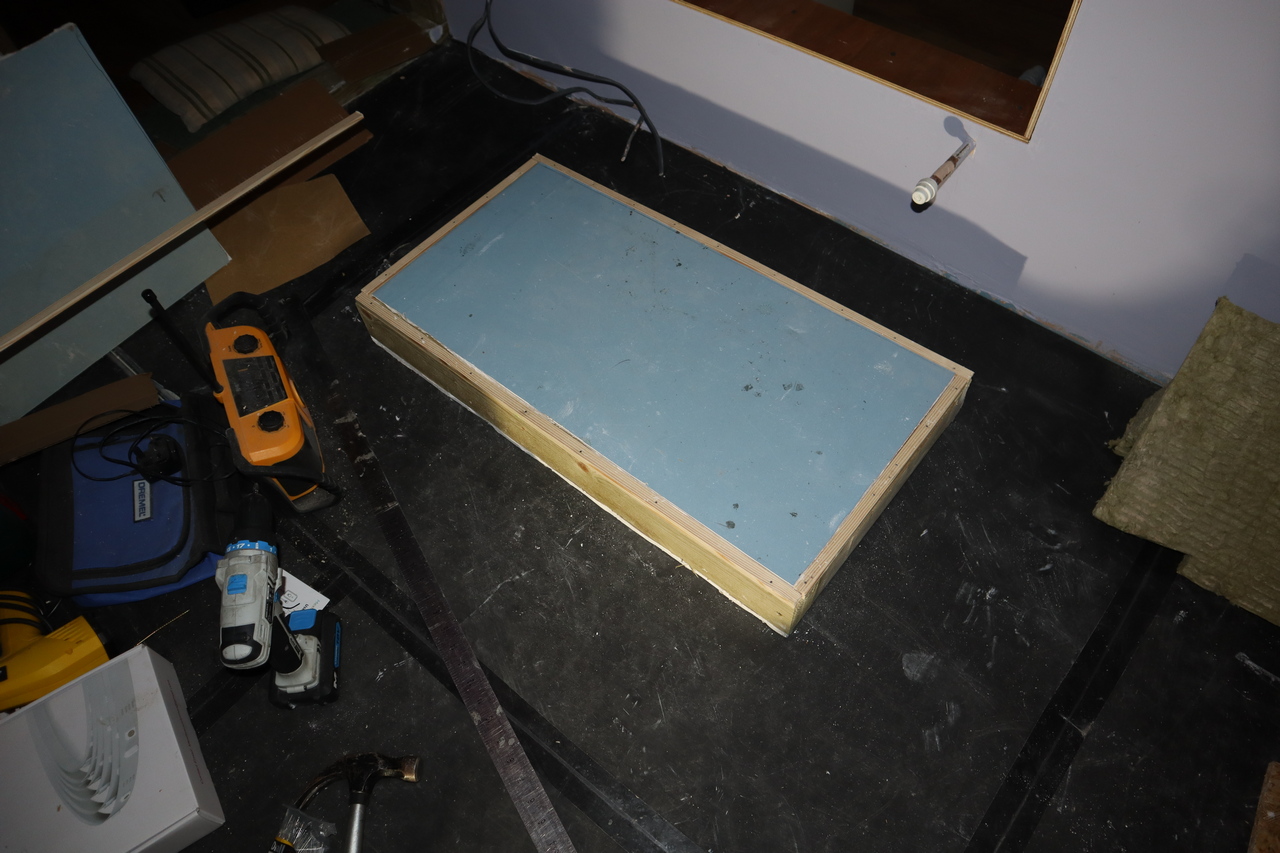 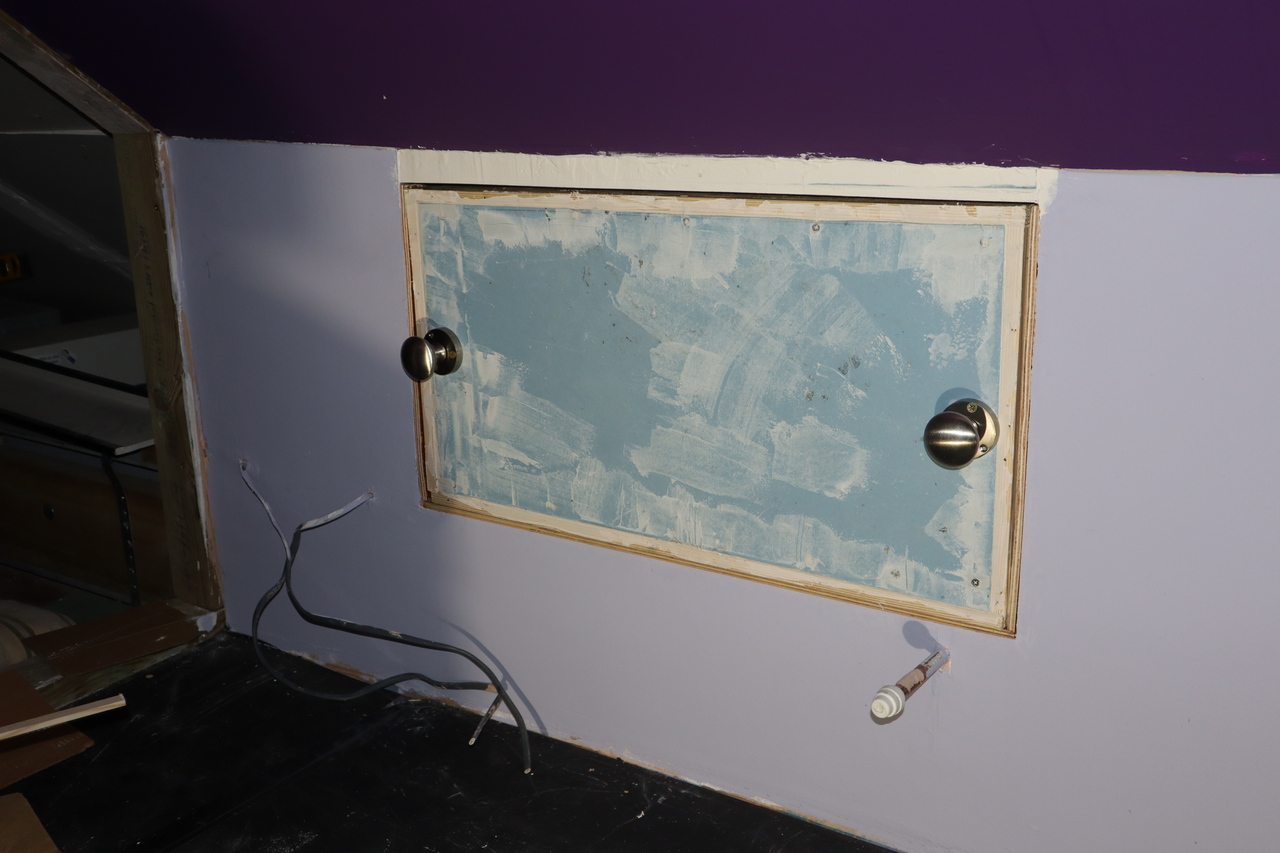 All hatches and doors will be covered with a final front of 5mm plywood which will be varnished to match the floor but as that won't be here until Tuesday I continued with the floor a bit: 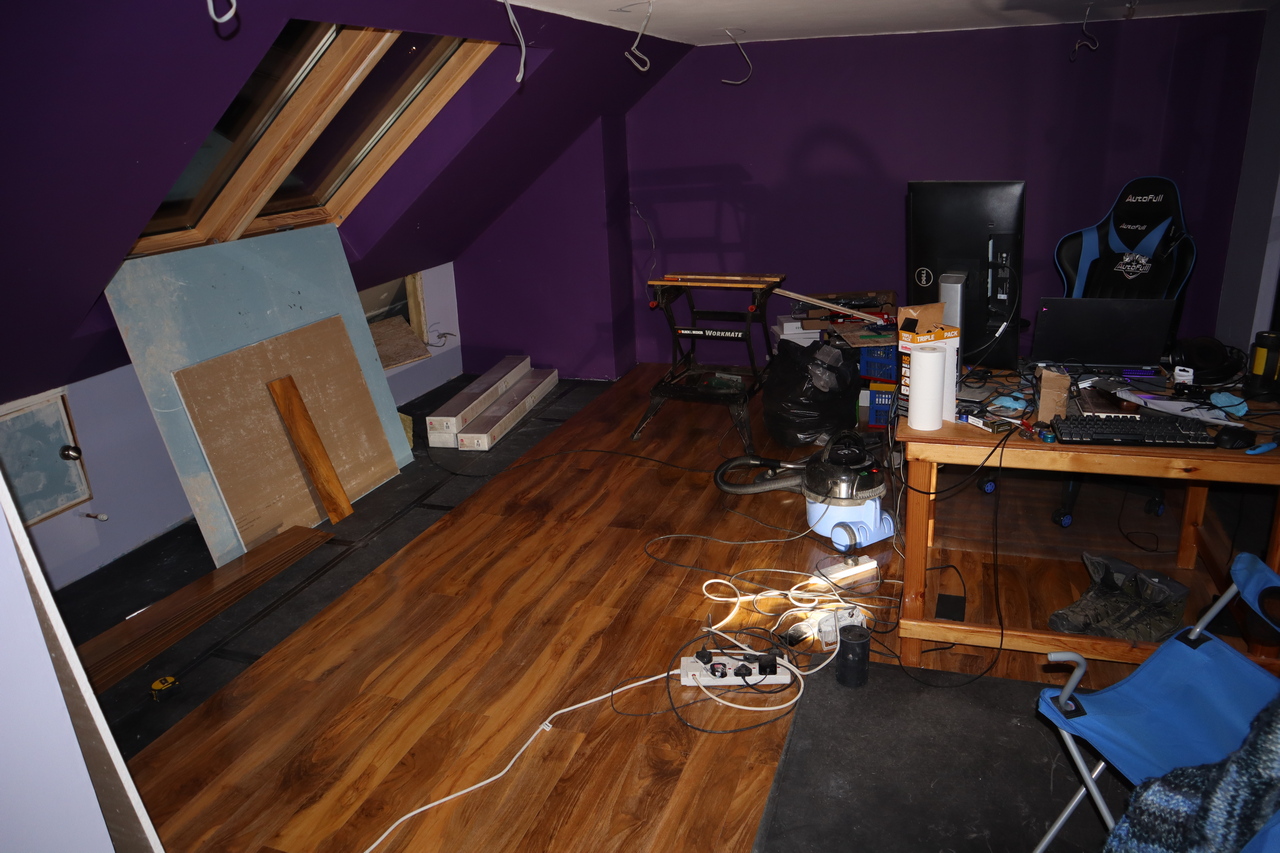 I'll finish the floor tomorrow and install the skirting board. I'll be leaving a 2mm gap between the board and the floor which I'll seal with green glue acoustic sealant to prevent sound leakage down the sides.

Once the ply is here I can line remaining cupboard and hatch apertures and construct the doors/covers for them in the same manner as those done so far.

The plywood will extend over the gaps between doors/hatches and their frame and I'll be installing stop-frame with rubber seals for then to seat against firmly. More on that in a later update.

The electricians are coming to finish up on Wednesday, and the studio desk should be delivered at the same time. I ordered a Zaor Miza 88XL Flex: 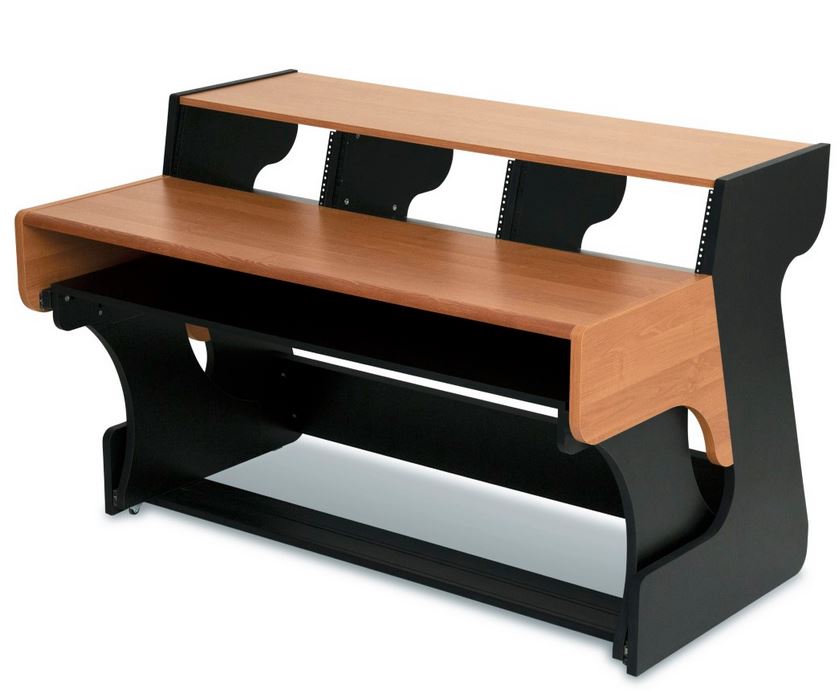 ... but I've had a rush of blood to the head and I'm considering asking them to change the order to a Miza X2 Flex as I think the extra length (it's about a foot longer) would be useful and I like the design a lot: 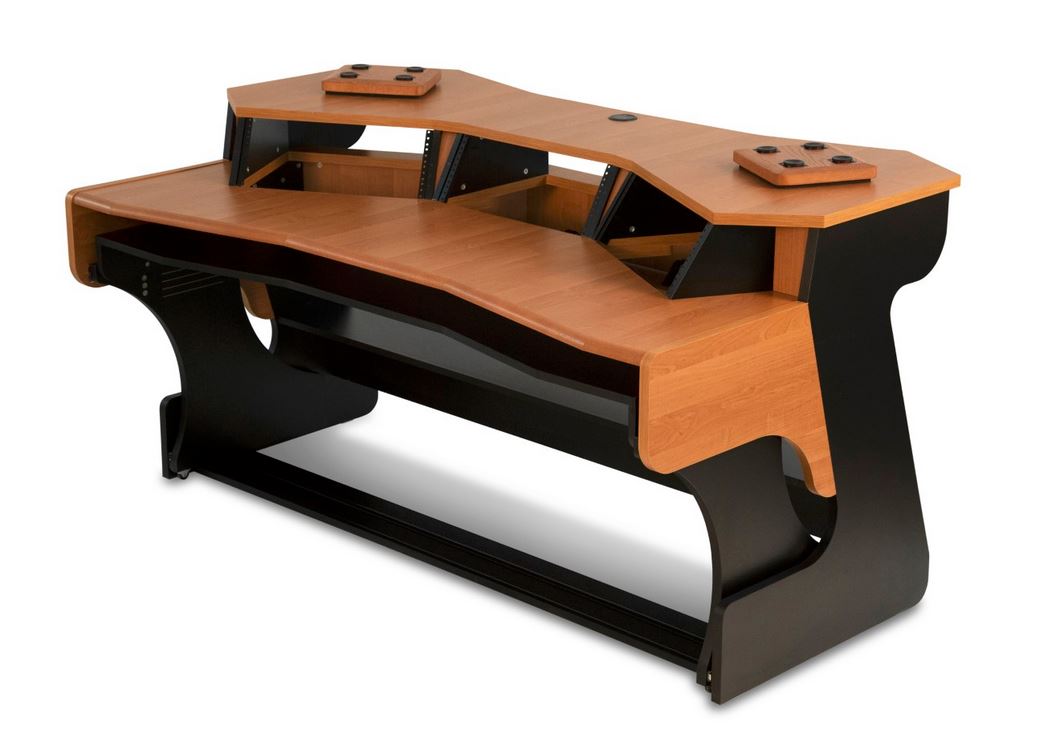 ... I'm in two minds and going to sleep on it first though.

So the place looks a bit chaotic but the end of the construction phase is in sight nonetheless. I've been in touch with Max who will be providing valuable advice, and a visit, with regards to the treatment which will follow once gear is installed. I think installing the gear is likely to take a while, not least because in an effort to reduce cables I'm planning to make up a bunch of multicores to feed the audio interface but I'll keep the updates coming as it all unfolds.

Oh, I just remembered I've still got the LED light strips and their aluminium channels with diffusers to put around the top of the walls too. The door handle/lock is also likely to be 'fun' given the solidity and thickness of the door, plus there'll be various rubber seals and so forth.

All for future updates

It’s exciting to see you’re in the home straight now, Eddy. I agree the M2 Flex looks a lot better.

WOW!!! It's looking stellar! You are probably equally chuffed and exhausted.

If I had the space, I would go for the larger desk in a heartbeat...

Nice, I've not seen any close up but all of the Zaor stuff looks really good. My (lack of) space meant that a custom build was the only real option to get exactly what I wanted and not waste any space, but there's a lot to be said for ordering something in!

I spoke to the vendor and though the Miza 88XL is in transit, when it arrives I can return it unopened for a full refund. In the meantime I ordered an X2 Flex, though it probably won't be here for a couple of weeks.

Plenty to be getting on with in the meantime though!