For all things relating to guitars, basses, amps, pedals & accessories.

Without wanting to detract in any way from Wonks’ latest creation which is seriously good looking, or turning the Guitar forum into a ‘look what I built’, I hope no-one minds if I post my creation. (Yes it is slightly self-indulgent, I apologise but I am quite proud of it).

I built a kit last year from Pitbull guitars and enjoyed it so much I thought I’d do another this year. However they didn’t have the one in stock that I wanted and I'd always wanted to build my own, so decided to bite the bullet and do a scratch build bass guitar. I should say at the outset that I'm not a luthier by any means - my only experience is the Pitbull build last year. For this build I followed a series of videos on YouTube by Crimson guitars where he builds a P Bass and I used that as a guide.

The design brief was simple, one pickup, one volume and one tone control, 24 frets (god knows why!) and my own shape based a little on the Musicman Axis Sport guitar, which you can’t actually get in a bass. (I'm guessing because with lighter woods it would suffer from neck dive). It had to be playable rather than pretty, with stable tuning – in fact I wanted it to be my main guitar, so definite function over form.

The body was made from an old mantelpiece in my house that I removed years ago – a six foot length of 6” x 6” iroko (I think), which I cut up into several bits and used three lengths for the body. For the neck I bought a chunk of American maple and some African rosewood for the fingerboard from a company in Scotland.

It was enormously enjoyable though if I'm honest, a very challenging process. Whilst constructing the body wasn’t particularly difficult, constructing the neck was! There just seemed to be countless critical points which if you did it wrong would result in complete failure; from installing a truss rod, to cutting the fret slots and installing them, shaping the neck and routing the neck pocket. And to do the neck radius I had to build a tool in order to build another tool (a curved sanding block) and then build another tool (a mechanism to hold the neck straight and secure whilst I ran the curved sanding block along), in order to create the radius, which took some time! When I watch YouTube videos of a CNC machine doing it in a couple of minutes, it’s enough to make you cry!

I did a build diary on Pitbull and loads of helpful and seriously knowledgeable people (Wonks especially) were kind enough to point out stuff that I’d missed, hadn’t considered or had considered but ignored!

Anyway finished it in July and tbh it’s taken a few months of playing, twiddling, adjusting the neck/frets/nut/action/bridge etc, letting it settle and then going through the process again until I was happy with it. It’s got a Seymour Duncan SMB-4D pickup which is a monster – the sound is awesome, the sort of growly bass sound I was after. The tuners and bridge are Gotoh - so not hugely expensive, however the tuning is rock solid. It's a bone nut and nickel fretwire. 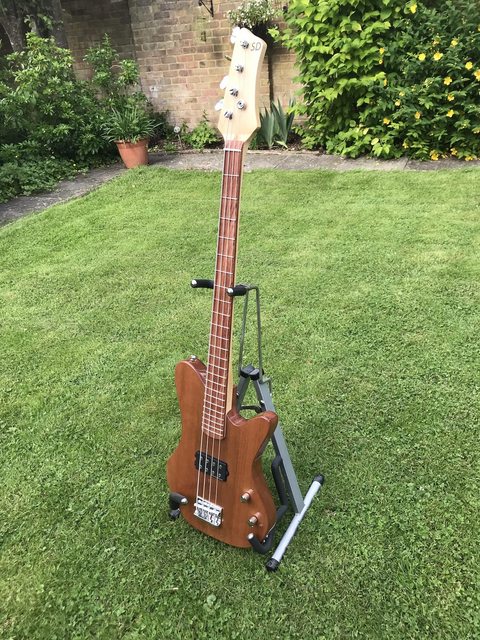 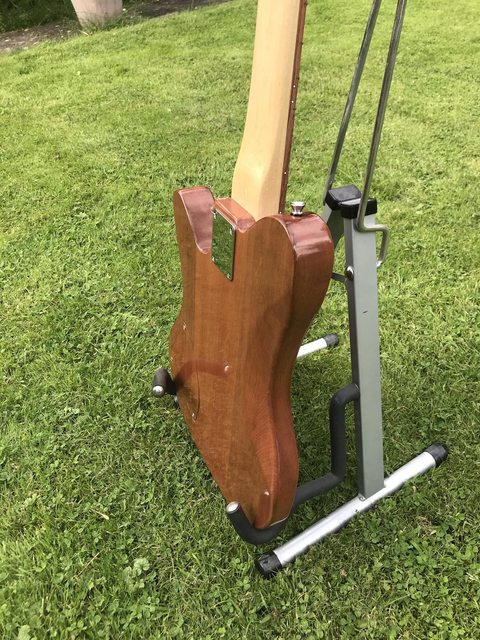 It's not perfect. Access to the upper frets (above 20 or so) is a little difficult and in hindsight I should have gone for 20/21 frets. Whilst it's not as heavy as my P Bass it is heavier than my J. And the tone control doesn't quite work as I expected it to. Not sure if it's the condenser I used or the wiring or what. Might need to investigate further. But it plays and tunes nicely and does sound lovely. 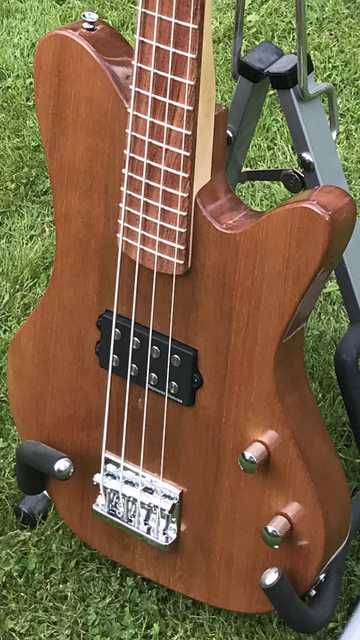 It’s now my main bass and finally got round to using it on a gig, which I have to say gave me a bit of a kick. 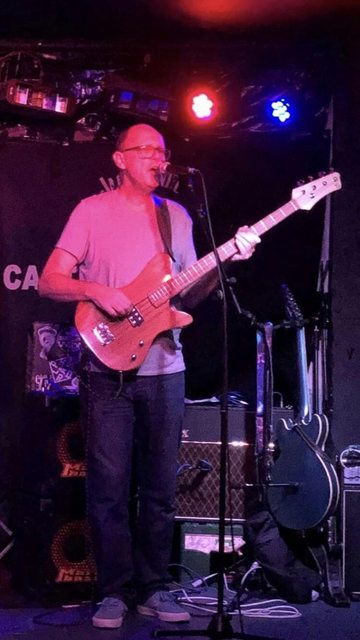 There really is something special about gigging with an instrument you built yourself. And it can be a great conversation starter.

Is it about a bicycle?

Very nice! It's nice to read a forum post that doesn't depress the hell out of me

I'm not as much of a guitar man as I'd like (and intend) to be but that looks very handsome indeed. A lovely bit of work!

The whole build is great but I really love the way you've done the control cover on the back. Very classy.

Yep, as I said on the other place, really nice job.

Nope.
Not jealous.
Not a bit

That bass is ace, well done, the craftsmanship looks like your attention to detail is to be applauded, the lawn looks well tended too

From the pic in your Pit Bull build thread it all looks to be wired OK. 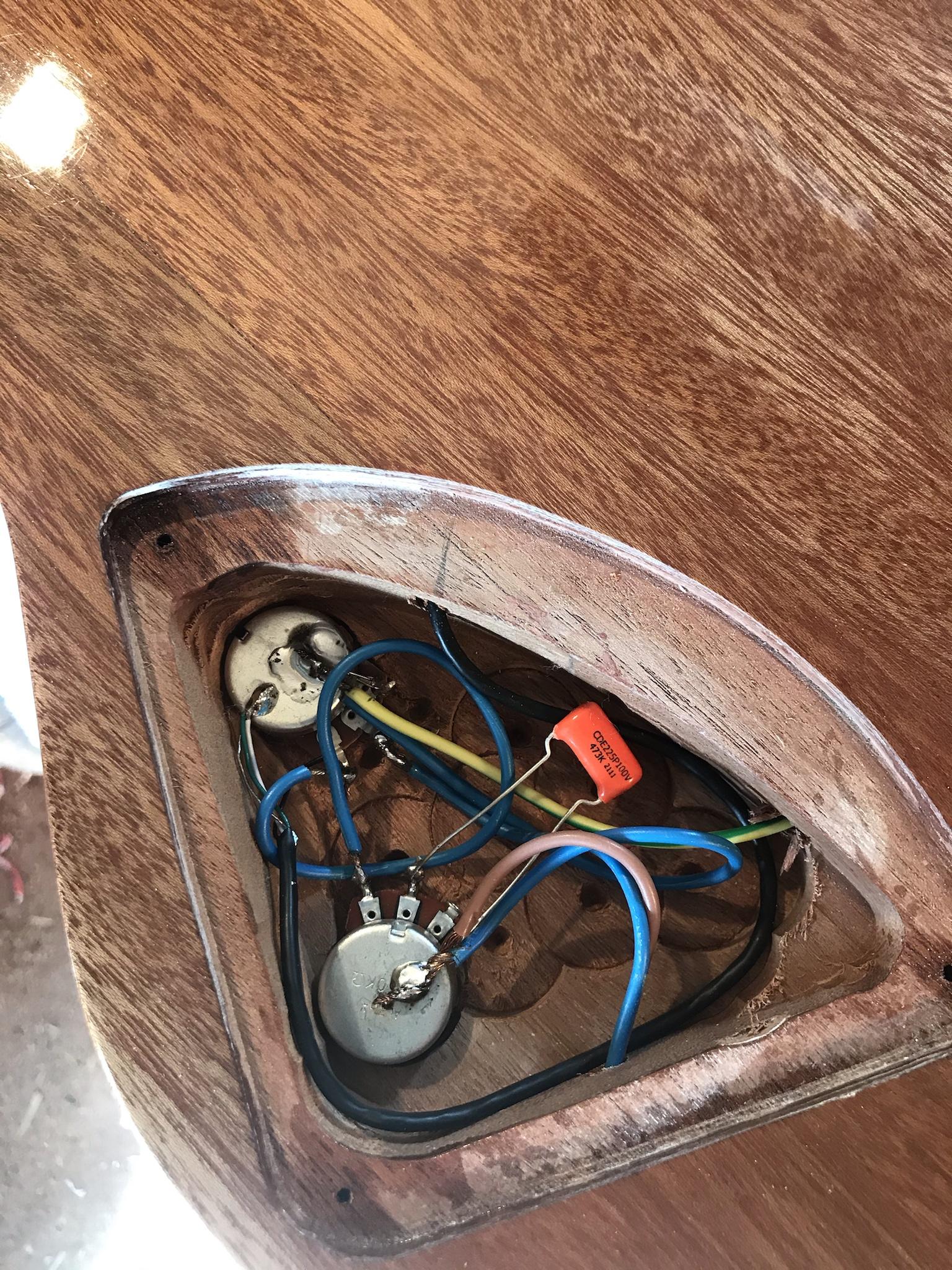 The wiring and soldering could certainly be neater, but it all looks to be connected correctly.

The 0.047uF orange drop cap is a pretty standard value.

You've left the cap legs full length, which makes them vulnerable to shorting out on exposed wire ends etc. so I'd double check that the cap legs aren't touching anything else in the cavity (I'd be tempted to cut them down and resolder). There's not a lot else in there for them to touch, but worth a check in case the tone pot has twisted round a bit with use. I use a lot of heat shrink these days on as much of the exposed wiring items as possible, which certainly does help to make accidental signal shorts a thing of the past.

I'd also just test the resistance to ground of the rear of the tone pot and the leg of the tone cap running to the back of the pot. They should be OK, but the soldering on the back looks a bit more 'blobby' than I like to see. You should get more of a smooth spread-out solder joint (like the pickup ground connections on the back of the volume pot) if the solder and pot rear were hot enough. Sometimes 'blob' type solder joints can be of quite high resistance and can benefit from resolderig with a hotter iron. For the back of pots it's better to use a higher power iron for a shorter period of time, than a lower power one for longer. the longer the iron contact period, the more heat transfers to the rest of the pot and can damage the carbon track.

I can't see the pot value or taper type. Audio taper gives a quicker response to turning down the tone control than a linear taper. As the tone pot is used as a variable resistor, (not as a potential divider like the volume pot) a 500k pot will take more turning down to get the same tone roll-off than 250k pot e.g. with a linear pot, a 500k pot on 5 is the same as a 250k pot on 10, so you should be able to see how all the tone action bunches up to be within the very bottom end of the pot's movement with a 500k linear pot.

So these days I prefer to use 250k audio taper pots for tone, for both single coils and humbuckers. You'll lose a very small amount of top end using a 250k tone pot on a humbucker, but it is barely noticeable to me (YMMV). I also normally fit 0.015uF caps, as I never want the full mud sound that a bigger cap value can give, which helps give a more controllable and useable tone roll off over 90% of the pot travel. You'll always get a lot more of the tone roll off action right at the bottom end of the pot's travel, but without a custom taper, there's not a lot you can do about that.

I often keep the plastic sleeve I strip from wires when making looms. It is useful for sleeving the bare wire legs of capacitors and resistors.

Is it about a bicycle?

Wonks, thank you that's excellent. I'll work through your suggestions and see what I come up with. And yes, I realise that some of the soldering and wiring (all!) could have been done better! I followed the Seymour Duncan picture, but I can see that some of the joints could be improved.

They are 250k pots. I got them from eBay and they are this:

Of course now I think about it I'm wondering if I got them the right way round?

As you can tell, this side of the project is not really my strongpoint.

Alpha pots are fine. A is for audio/log taper and B is for linear taper. Switching to an audio/log pot will get things starting to happen sooner and the action less bunched-up in the lower regions.

But tone pots are a personal choice. Some people prefer audio taper, some linear. I'm an audio taper person for tone, but a lot others like linear. There is no right or wrong here, just preference.

Whereas volume pots really should be audio taper. A very small percentage of people will like linear volume pots, but most people will chose audio if they have the choice. But if you only use them at 0 or 10, then it really doesn't matter which you have!