I recently rid myself of the 'fabulous, but far too complex' Synthstrom Deluge.

The one feature I used often with it was it's graphic sequencer - 64 buttons I could jab on/off to build a looping sequence.

I thought that finding an equivalent for iPad would be fairly simple, but I've not had any joy at all. Those that seem to come close have far too much else going on (e.g.Drambo), and those that seem ideal (e.g. GridInstrument/Lemur) seem to have been abandoned by their developer.

I was pointed at Rozeta, but that app misses out this type of sequencer entirely - odd given the others it contains.

Short of building something for myself, any ideas? 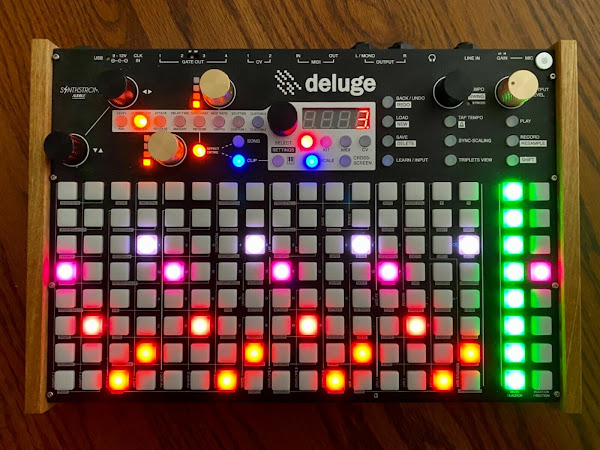 I noticed StepPolyArp on the App Store. Seems to do a lot, but I haven’t tried it.

Edit: Yes I can, I wasn’t looking properly.

Thanks for that. StepPolyArp is looking a good candidate.

Wow -- never would have thought you'd shift the Deluge!

Far too complex for my needs. Every time I came back to it I couldn't remember the combinations of buttons to achieve even the simplest of functions. I would spend more time scrolling up and down the cheat-sheet than making music.

A couple of times I tried to create entire songs on the Deluge, but it was like building a full-sized house out of matchsticks - technically possible, but far too much hard work.

Although they've added linear features to the Deluge it is heavily skewed toward pattern-based composition - to the point where trying to find your away around a song is like searching for that green matchstick you know you laid in that wall last Tuesday. My music doesn't slavishly repeat over and over, so having to create unique sections bar after bar was tedious in the extreme. There are lots of ways to achieve 'uniqueness', but all I want to do is play it in, not sit finding key combos to do it.

I finally lost patience with it when I couldn't remember how to remove some controller info I'd recorded without having to dig yet again into the manual. Something inside me said 'you can use your time better than this, man'...

With V4 on the way I felt it was time to let it go to someone who might get more joy out of it than me.

I do miss the 'insta-prod' 8x16 grid that I used for creating repeating sequences, though - the Deluge is spot on for that. But to hold onto it for that one use (which is what it was gradually coming to) - nah. So I would like to recreate that function in some way.

I've grabbed StepPolyArp, and it seems to do a good job - not quite as immediate as I might like (though I'm on baby steps at the moment, so there may be options I've not yet set), but close to what I wanted.

TBH I can tell a similar story about the Conductive Labs NDLR. I really liked that machine, but programming it was a bit of a chore. I also had a big problem with it not quantizing chord changes to a bar. I did ask if this could be added, but it seems the makers have no plans to update the firmware, and also said that they didn't have storage space to add another quantise value, so... It's a shame - I really liked that box.

But I've pretty much created my own 'NDLR-alike' in Cantabile, which *can* quantise to bar, so onward and upward.

I have tried most of these on the ipad, mostly in AUM -
Playbeat
Riffer
Digikeys
Elastic drums
Atom or Atom 2
Arp Pro
Helium
Drum Computer
Midi Tape rec
Rozeta
There are more but I haven’t used them in awhile.

I'll definitely take a look at those.

I quite liked Octachron, but its built-in scales are upside down (fixable, but needs to be done manually). More seriously it doesn't sync to an external clock, which kills it stone dead for my use.

The sync issue was irritating for me. I wanted the ipad to sync with my elderly Mac tower via a cable. Either the tower was the master or the ipad was I didn’t care, but no joy. The iconnectAudio+ was the answer at the time. I think they make a midi only box.

How are you trying to sync to an external clock? I've always felt like the iPad/iOS was pretty much a toy or a neutered computer at best due to how locked down Apple had things, particularly the extreme restrictions on bluetooth devices. I know they opened it up recently, and I've seen a number of devices for the new bluetooth BLE-MIDI standard advertising iOS compatibility.

I'm old enough to remember both how terrible bluetooth was (and sometimes still is) and back in the days when people had to optimize their computers to avoid wired MIDI latency issues. I'm not sure I'd trust it in order to use an iPad as a timing source.

I'm not using the iPad as a timing source - just a way to try out note sequences. Cubase sends MIDI clock to it and it ticks along nicely.

In fact I'm doing just that now with my new friend StepPolyArp (which *does* accept incoming clock, unlike the Octachron plug-in previously mentioned) and it's working a treat!

I have a few ways of getting MIDI to/from iPad. For simple (not time-critical) control functions I use my wireless network. I also have the CME WIDI Bluetooth option, but I don't use this either when timing is important.

For anything more taxing I use a Mio USB/MIDI cable. That's the option when I'm sending data to the iPad to drive the level meters on my custom mixer panel, for instance.

A few ways to do it, but personally I wouldn't use iPad for anything too demanding anyway. I also see the iPad as a bit of a cut-down device - useful in its own way, but not a replacement for a 'proper' computer.

I’ve used the ipad as a realtime external FX unit - Flux:FX is great fun.
And as an idea generator. When inspiration hits I want to get the idea into the tower as fast as possible and I usually free-time it and adjust to the exact tempo in Logic.
Some of the ipad synths have a few really cool patches so I’ll try my hand at sync again. My issue is the 10 year old computer which doesn’t have the latest bluetooth or the newer wired connection abilities.
The Step Poly Arp creator also has another cool app, I think for generating chords. It’s been awhile since I’ve used it.

As an aside, I've heard back from the writer of Octachron, and he does hope to include external sync in a future update, but my 'upside down note order' is less likely to be solved.