Members who have 100 or more posts under their belt can contact the Mod Team requesting membership of this forum. We will add you to the members and you will then be free to post here to promote your own music, recording activities, releases and gigs, etc.

I am thrilled and proud to reveal that the new project, 'Scattered Chapters', by virtuoso guitarist Gordon Giltrap MBE and Paul Ward (of this humble parish!) is now available from Psyochotron Records.

'Scattered Chapters' is a dynamic multimedia project created during lockdown. It takes the form of a brand new Gordon Giltrap/Paul Ward album, alongside a beautiful book published by
Wymer Publishing.

There are 18 compositions in all. Three of the pieces are the creations of Paul Ward. There is an orchestral version of an early Giltrap tune and a reworked Celtic flavoured version of the classic 'Heartsong'.

The book features short stories written by world-famous, award winning composer, guitarist and author Nicholas Hooper, a man who has composed music for over 250 films, the most well-known being scores for two Harry Potter films. Nick is also a self-published author and was deeply inspired by the back stories that inspired the music.

The book also contains details of individual artwork from some of the most exciting artists working in the UK today. Each of them was captivated by the project and the end result is a stunning array of paintings, ceramics, glass art and jewellery reflecting the stories and the tunes, all faithfully reproduced in the book.

Also released is the video 'The Making of 'Scattered Chapters', that features artwork, music and a reading by Nick.

It's been an emotional journey on many levels, some of which I have shared in this very forum. I think that comes through in every atom of this project.

I'd love to hear what people think of the results... 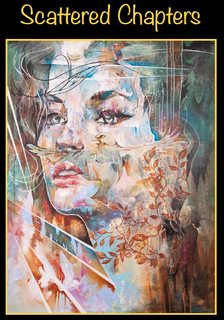 Wow, what a fabulous idea!

This looks (and sounds!) amazing. I loved the video and am now eagerly anticipating a couple of deliveries!

I shall check this out tomorrow when I am awake.

Bravo Paul (and of course Gordon, who I met some years back at a Paul White Christmas party

Early signs are extremely encouraging! Thanks for the kind words, chaps.

I think I'm being a bit dozy here but I can't find where to actually listen to anything?

You can hear some of the music playing throughout the video: https://youtu.be/q8NS5eJxKBg.

The video's opening track is 'Starfield'.

BTW, the noise you hear at the beginning of 'Starfield' is the genuine sound of a comet...

After hearing the opening track on the video the CD was ordered immediately!
That "Car boot sale Squier strat" sounds great.

Looking forward to hearing the CD