Here's the classic way to arrange your synths, courtesy of TONTO: 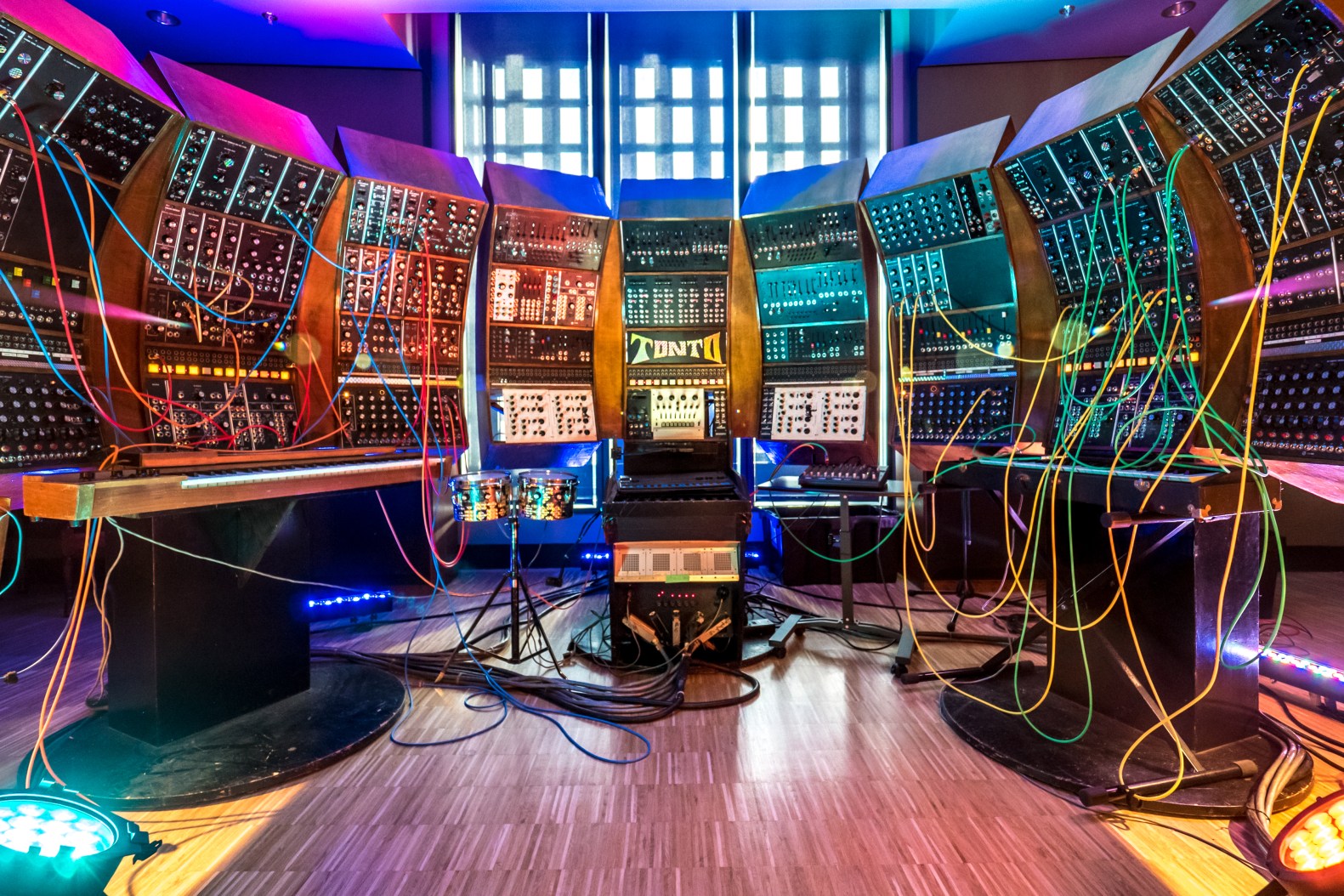 The Elf wrote: ↑Thu Oct 06, 2022 11:37 am That's my point. I also like to have everything within reach that *needs* (and is useful) to be - and my space is also like a cockpit (those that have seen me on camera know this). As mentioned, I was *never* going to use my refaces' own keyboards, so no need to be able to reach them. No need to access my MiniTaur's front panel from one month to the next, so out of the way it goes.

Space is at a premium, so I have to get smart with choices. My space and choices work well for me.

Yes, designing our spaces is a major thing, it can make or break if we do anything at all, and feel comfortable.
My problem is trying to get it all in, with no compromises, the instruments themselves, a mixer, computer, monitoring, all from one position.
I’ve got an L shape set-up, in the middle of the room, my modular mixer and effects down the long side, my mother keyboard computer and monitors across the short side, so I can hear clearly whatever I’m doing in that space.
But there isn’t any room for expansion, apart from just piling up stuff all over the place.

So why, why, why do manufacturers believe we all want 'desktop' form devices?

It's even worse when those desktop devices end up measuring just very slightly over, or under, 19-inches wide. Then it really does seem spiteful.

I guess it's because, they somehow think that theirs will be the only device gracing the customer's desk, uncluttered, empty of everything other than THEIR synth and a mouse and keyboard.

They also want to festoon the front panel with knobs and lights and the marketing department wants the 'design language' to shine through, and how can you do those things with a boring 19" rack?

But you are so right, when every 80s or 90s offering from Korg, Yamaha or Roland was shortly after followed by the rack version, it was great.

Now I have my 'bijou' workspace I have exactly ZERO space for a desktop module. I can nearly fit the Console 1, Audient iD14 and Montor Station.

But I could probably squeeze in a 19" rack half under the keyboard stand.

The millennials like small, inexpensive boxes that are interactive, hands on, and *fun* - and dull, ugly 19" racks have no place in their studios.

To generalise, it's seen as boring, "engineer-ey" and old-school by the trendy folk, and it's not hands on, interactive, or "fun" - and unlike us back in the 90s, when we needed more sounds and polyphony and didn't have DAWs, a wall of gear was a space-efficient way of handling that (and we saw the lack on hands-on interactivity as an acceptable compromise - and lets face it, synths of that time weren't that hands-on anyway - it was the time that knobs forgot...). We just needed sound boxes.

Personally, I did the "connect up loads of inexpensive boxes" back in the day (drum machines, mono synths, TB/TR boxes, Boss pedals and microracks, cassette portastudios etc), as it was the only way we could afford some kind of studio, and I was glad to move on from that and have no wish to go back there, but a lot of people these days are not inspired sitting behind a computer and want a bunch of toys to play with and to, I guess, feel like they are performing a bit more. (And I understand that well enough.)

Basically, what Elf wants, and what youngsters want are fairly wildly different, and there are more youngsters to market new fun boxes to than seen-it-alls like Elf (and Myself) (incidentally, the name of our next concept album

Basically, rack units aren't seen as fun and dopamine-inducing (or YouTube showcasing) gear and our computers already do the "box of sounds" thing perfectly well, so racks aren't really a thing (apart from more studio-oriented hardware, of course, which is a different use case. Audio interfaces, compressors etc aren't really "fun" in the same way as these little instruments).

But I'm sure we've had this debate here before...

And I guess, that market segment is the big difference.

Back in the 80s/90s when a flagship synth could rival a car in cost (or in some cases a house!) The big market was pro musos, or studios.

Bottom feeder bedroom warriors like me could only look on and dream, and make do with, whatever we could afford. Portastudios, 2nd or 3rd hand synths, repurposed home keyboards, just maybe a poly800 or Juno. (I knew precisely one DX7 owner in our local music scene)/

So the democratisation of the technology in both quality and price means that the potential customer base is no longer pro musos it’s precisely the people who were us in the 80s. And therefore it’s less about need (to do the job) but want, so many of the things mentioned previously are what are pushed.

Studio Bell, Home of the National Music Centre, is an amazing facility with an incredible keyboard collection. I have fortunately been involved in the project since it’s inception. The goal has been to create a Living Museum, where artists have access to the incredible collection. As you can see from some of the images, there is a public aspect to view some of the collections.
I know I am biased here, but there could be a great SOS article about the National Music Centre. Hint, hint.
In terms of TONTO, the inventor, Malcolm Cecil, visited a couple of years ago before his passing. TONTO was designed to be played by multiple people simultaneously, hence the Orchestra of the The Original New Timbral Orchestra. Malcolm worked with now famous studio designer, John Stroyk, on the design of the cabinets. John was a student of Buckminster Fuller, and he measured Malcom’s arms so that everything was in an arms reach. Part of the design of TONTO was to be playable in the front and serviceable in the back. For 1968 this was a brilliant design.
Another great part of the design of the studios, is that everything is interconnected from the acoustic rooms, live rooms, live music stage with all three of the control rooms, including the fully functioning Rolling Stones Mobile.
Great facility, come for a visit.

Great post Mattsong - thanks for all the fascinating info!

MarkOne wrote: ↑Fri Oct 07, 2022 1:25 pm They also want to festoon the front panel with knobs and lights and the marketing department wants the 'design language' to shine through, and how can you do those things with a boring 19" rack?

Come on, how much space do you need for a filter cut-off and attack/release knobs?